In the past week, there was a significant downturn in case growth. But this drop may have been due to the Thanksgiving holiday, where cases reported dropped off, rather than to an actual decline in cases. Cases are now surging again, as case reporting of earlier cases is catching up. Again, this is likely due to the holiday rather than to an actual surge. There does seem to be continued improvement overall, but we won’t know for a couple of weeks, when the data normalizes. We still do not know whether the third wave of the pandemic has peaked.

Another risk we need to watch for over that time period is whether holiday travel has sparked another surge in new cases. Again, we can’t know yet but should have a better idea in the next couple of weeks. In both cases, while signs are positive, we simply need to wait to see how the data comes in.

The good news on the medical front comes from vaccines. Both Pfizer and Moderna have now applied for emergency FDA approval, meaning actual vaccinations could start this month. With two effective vaccines likely starting deployment shortly, we can start to move into the next phase of pandemic management. Recent projections of vaccine availability suggest we could approach herd immunity in the U.S. as soon as June. While the short term remains unclear, the medium and longer terms look much better than they did even a couple of weeks ago.

The economic news was also mixed. Pandemic effects have started to show in the economic news, with generally softer data through November, including higher layoffs and softening consumer confidence. That said, the most recent data has been better as sentiment has improved with the prospects of vaccinations. Initial claims for unemployment dropped back again this past week, and consumer spending growth has started to improve again. Business confidence and investment also remain solid, despite the recent consumer weakness. Despite the slowdown, growth continues, albeit at a slower pace, and may be improving. This is what financial markets are seeing, continued growth along with vaccines and the prospect of herd immunity, and that drove them to all-time highs in the past week. Let’s take a look at the details.

New cases per day. The most obvious metric for tracking the virus is daily new cases. Here, we see the distortion caused by the Thanksgiving holiday. First, the number of daily cases dropped off significantly over Thanksgiving. The decline may have been real, although it was more likely due to reporting staff being off for the holiday. Supporting that idea is the subsequent rebound, which is likely due to catch-up reporting of earlier cases.

Because of this, it will take a couple of weeks to sort out the effect. Based on what we know so far, it is quite possible we have seen a top and that the rebound will be short once cases are caught up. Beyond that, however, there is also the potential for another surge in infections driven by holiday travel. Given both of those factors, while the recent data does suggest a crest in the third wave, it is too early to tell for certain.

New daily infection rates were 203,700 on December 2, up from almost 183,600 a week earlier. But, as noted, at least part of the increase may be due to catch-up reporting. The seven-day average number of new cases per day dropped to 164,800 per day, down from 180,000 a week ago, but again this is affected by the lack of reporting last week. It is still reasonable that infections will peak in the next couple of weeks. But with two significant risk factors, that remains to be seen. 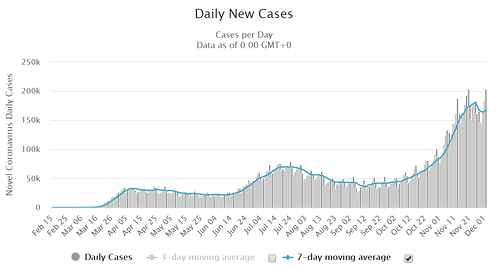 Death rate. The death rate reporting was also affected by the holiday, and the same caveats apply. This is a lagging indicator, and it runs from 6–8 weeks behind case growth. As such, recent increases in the death rate reflect faster infection growth in mid-October. On a seven-day moving average basis, daily deaths were at 1,658 as of December 2, down from 1,713 in the prior week. As the number of new cases has spiked since early October, we can reasonably expect death rates to increase substantially over the coming weeks. 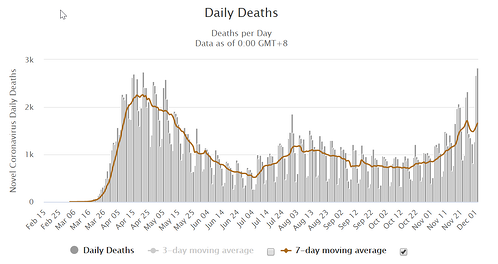 Testing. Finally, we see the same distortion in the testing news. But in this case, the implications are positive rather than negative. Where the improvement was not as great as it looked in the case data, here the decline is not as bad as it looks. The number of tests dropped off during the holiday week. Although the positive rate rose, that likely reflects the fact that the tests that were done were more likely to be targeted to those most likely to be infected. The current level of positives has spiked in recent days, but it may well roll over again as testing numbers normalize. 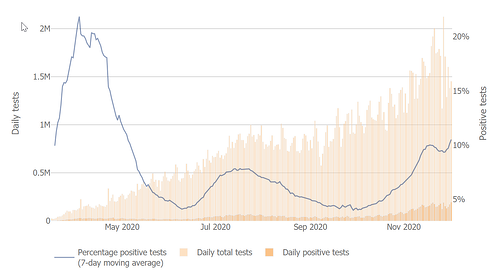 The bottom line is that, on the medical front, despite signs of improvement, the effects of Thanksgiving (both the data distortion and the potential travel effects) mean that we will not know for several weeks whether the third wave has crested or not. As such, the risks are still substantial. That said, given the wider imposition of shutdowns and restrictive policy action, further improvement is likely after that time period. At that point, vaccinations should start to bring the pandemic under control as well. While we still see risks in the short term, the medium- and longer-term pictures look brighter.

The Economy: Data Softer, But Signs of Faster Growth

Consumer economy. While the medical situation remains in flux over the next couple of weeks, the economic recovery, which had been showing signs of slowing, may now be picking up. Layoffs had been rising, but the most recent report had them dropping back again. Consumer confidence has softened, but retail spending continues to grow. Looking at higher-frequency data (as shown in the chart below), there are also signs that consumer spending may have started improving again. Overall, the data suggests that the third wave has slowed growth but that the vaccine news may be helping growth to recover. 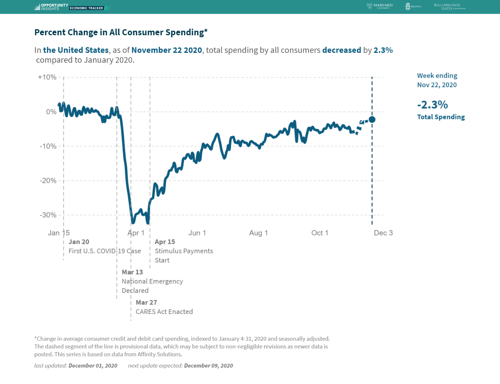 Business sector. Despite the slowing in the consumer economy, the business sector continues to do well. Business confidence and investment remain at pre-pandemic levels, and specific higher-frequency indicators are showing improvement in many cases.

The real question, going forward, is how durable this recovery is. Much of the data has continued to improve despite the ongoing third wave, suggesting substantial resilience, and there are signs that the economy is adapting to the pandemic. There are signs that the positive trends may have weakened—and lockdowns in several states will be a headwind. But given the resilience of the recovery in the face of the medical and stimulus headwinds, it is likely the recovery will be durable. And with recent positive news, it may improve again in coming weeks.

With that durability in the face of risk, we should remember there are also opportunities. The biggest one at the moment is that as vaccines become available, we could see consumer confidence and spending bounce back. Another is the very real prospect of another federal income support program, which would help the economy ride out any weakness. In any event, while there are certainly headwinds, so far at least, confidence and spending are still holding up and the recovery is still moving forward despite some slowing.

Markets continue to rally and hit all-time highs again last week. Reasons are again the good news on the vaccine front, with both Pfizer and Moderna applying for a use permit for their vaccines. The chances of vaccinations starting in the next couple of weeks and of effective vaccines being widely available in the next three to six months or so now look very real.

Between the resilient economy and the potential for multiple vaccines in the near- to medium-term future, markets are largely ignoring the medical risks. Given everything that is going on, that seems a reasonable reaction, but one that also leaves open the possibility of more volatility ahead if medical risks move back to the headlines. We can reasonably expect the current positive trends to have some durability over the next couple of weeks, but the medical news could easily lead to more volatility during that time.

Keep an Eye on the Short-Term Risks

The news this week is that the third wave may be cresting, although significant risks remain, and that the vaccine news continues to get better, with more than one vaccine likely to be this month. This news, despite signs of slowing economic growth, has markets cheering.

The risks are real in the short term, with Thanksgiving both disrupting the data reporting and potentially generating another surge in infections, and this could continue to be a headwind for growth. That said, growth has continued and has been much more resilient than expected. This is a positive signal for the future, and we have more upside risk here as well with the possibility of more federal stimulus.

Given all of this, over the next couple of weeks we will see substantial uncertainty in both the medical and economic news. The most likely case appears to be slow improvement of the medical news and continued but slow improvement on the economic front. Markets will likely keep bouncing around on new developments, so expect more volatility. The good news is that we may well be approaching the beginning of the end of the pandemic if vaccines roll out as expected. We will get the pandemic under control again—but it will just take a bit longer.