With new infections hitting all-time highs last week, the medical news continues to get worse. Indeed, the third wave of the pandemic has accelerated around the country, with case growth in many states at levels that threaten health care systems.

The good news is that multiple states are now implementing anti-COVID measures (e.g., mask mandates and partial lockdowns), which should help slow infection growth. There are preliminary signs this implementation may be starting to work. While it is too soon to be certain, we may be approaching the peak of the third wave. We should know more in the next couple of weeks.

More good news on the medical front is that the Pfizer vaccine data was confirmed as being even stronger than initial reports and that the Moderna vaccine showed very strong initial results. This development should help over the next six months or so, although it will be some time before the vaccines become widely available enough to have a meaningful national effect.

Despite the continued increase in the medical risks, the economic recovery continues. The jobs report two weeks ago showed continued job growth, and initial claims for unemployment remain low by recent standards. Consumer confidence remains solid, and retail spending continued to grow. Business confidence and investment also remain solid. With the continued economic progress, on top of the better vaccine prospects, financial markets have rallied. Let’s take a look at the details.

The Virus: New Cases at Highs, May Be Topping

New cases per day. The most obvious metric for tracking the virus is daily new cases. Here, we see that widening state-level outbreaks have increased viral spread, to the point we continue to see new daily infection highs, at almost 188,000 on November 13. The seven-day average number of new cases per day is now up to almost 165,000 per day, up from 130,000 a week ago. This is the ninth week in a row we have seen an increase, although the rate of increase has dropped slightly over the past week, for the first time in this wave. This drop may indicate that infections will peak in the next couple of weeks. The third wave is now significantly more severe than prior waves and looks likely to be much longer lasting. If we do indeed see one, a peak would be a very positive sign. 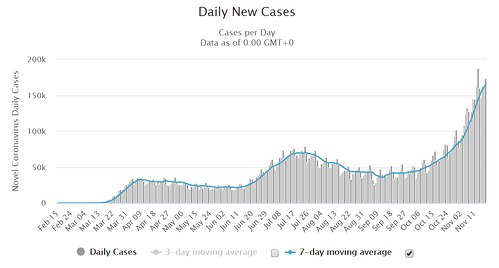 Death rate. The death rate also continues to rise. This is a lagging indicator and runs from 6–8 weeks behind case growth. As such, recent increases in the death rate reflect faster infection growth in late September and early October. On a seven-day moving average basis, daily deaths were at 1,266 as of November 18, up from 1,080 in the prior week. As the number of new cases has spiked since late September, we can reasonably expect death rates to increase substantially as well over the coming weeks. 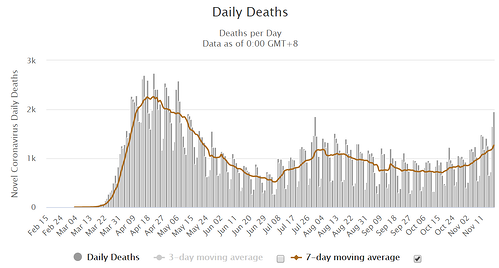 Testing data. Finally, the testing news also got worse. The number of tests has peaked for the moment, although it remains quite variable. The positive testing rate also continues to rise further above the recommended maximum of 5 percent, showing that the pace of increasing infections is again outrunning testing capacity. While some of the increase in cases may come from better visibility from increased testing, the rising positive rate suggests the growth in cases is more likely due to a widening range of infection growth. This conclusion is supported by the fact that, in several states, the positive rate is now well over 20 percent. 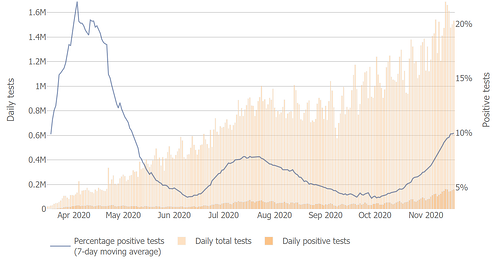 The bottom line is that on the medical front, despite some preliminary signs of topping, the trends are still moving in the wrong direction, and a third wave continues to spread. Twenty-nine states are now seeing the fastest spread of the pandemic thus far, up substantially from last week. In several of those states, there are outbreak hotspots that are now health emergencies. Even in states where the virus remains under control, spread rates are also rising.

Looking forward, the question is whether the situation will continue to worsen. Given the ongoing accelerating infection rates and the fact that many outbreaks are in rural areas with limited local health care resources, that outcome looks likely. Given the rising positive test results around the country, as well as the lags between infection and detection, we are also likely to have weeks or more to go before the full effects will be seen. That said, several states are now implementing policy measures to limit viral spread over time, and there are signs infection rates—although still very high—may be starting to slow. Overall, however, the medical risks are likely to keep rising in the coming weeks, as the third wave runs its course.

Consumer economy. While the medical situation is deteriorating, the economic recovery continues, despite mixed data. The job market has been better in the past couple of weeks, with the most recent jobs report coming in ahead of expectations and with layoffs continuing to be low by pandemic standards. Following the jobs data, consumer confidence has also held up.

Looking at higher-frequency data (see chart below), however, there are signs that consumer spending may have stopped improving. Overall, in the context of rising medical risks, the data suggests that the consumer is still resilient, but cracks may be starting to show. 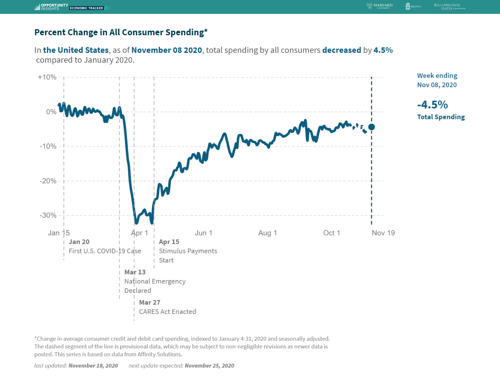 Business sector. On top of the signs of improvement in the consumer economy, the business sector continues to do well. Business confidence and investment remain at pre-pandemic levels, and specific higher-frequency indicators are showing improvement in many cases.

The real question, going forward, is how durable this recovery is. Much of the data has continued to improve despite the ongoing third wave, suggesting substantial resilience, and there are signs that the economy is adapting to the pandemic. There are indications that the positive trends may be weakening—and pending lockdowns in several states will be a headwind. But given the resilience of the recovery in the face of the medical and stimulus headwinds, it is likely the recovery will be durable, although we may well see some slowing in coming weeks.

With that durability in the face of risk, we should remember there are also opportunities. The biggest one at the moment is that with the passing of the election, another federal income support program has become more likely, which would help the economy ride out any weakness from the rising medical risks. In any event, there are certainly headwinds. But so far at least, confidence and spending are still holding up, and the recovery is still moving forward despite some slowing.

Markets continue to rally. The main reason for this is good news on the vaccine front, with both Pfizer and Moderna reporting strong initial results. The chances of effective vaccines being widely available in the next six months or so now look very real. As other companies report their vaccine data, there is also a real possibility the situation could become even more favorable.

Between the resilient economy and the potential for multiple vaccines in the near- to medium-term future, markets are largely ignoring the rising medical risks. Given everything that is going on, that seems a reasonable reaction, but one that leaves open the possibility of more volatility ahead as medical risks move back into the headlines. We can reasonably expect the current positive trends to have some durability over the next couple of weeks, but the medical news could easily lead to more volatility during that time.

Keep an Eye on the Risks

The news this week is that the reported effective vaccines look to be real and to be widely available in the next six months or so. This development, on top of the continued economic resilience despite the ongoing third wave, has markets cheering. At the same time, they continue to ignore the medical risks, which are rising. The third wave continues, although there are preliminary signs infections may peak in the next couple of weeks. Still, the risks remain material at the national level. Note, however, that we have been through this before. The policy changes that can once more bring the pandemic under control are now underway in many states, especially those that have been hardest hit, which will help going forward.

The economic risks are also real. Despite recent positive news, we do see some slowing in the improvement in consumer spending. That said, growth has continued and has been much more resilient than expected. This is a positive signal for the future, and we have more upside risk here as well, with the possibility of more federal stimulus. Finally, while markets are rallying on the positive vaccine news, more volatility is quite possible as the medical news moves back into the headlines.

Over the next couple of weeks, the most likely case appears to be further deterioration of the medical news, although possibly at a slowing pace, and continued slow improvement on the economic front. Markets will likely keep bouncing around on new developments, so expect more volatility. This will be a difficult period until we get the pandemic under control again—but get it under control we will. It will just take some time.