This week, the medical risks continued to rise. Notably, outbreaks in Arizona, California, Florida, and Texas got worse, and other states also showed faster outbreaks. As such, health care capacity is now a concern in several cities. Nationally (as of July 15), the number of new cases broke 70,000 for the second time, while the daily spread rate is holding around 2 percent per day. Further, even as the number of tests has risen, the positive rate is holding at more than 8 percent, which is well above the 5 percent achieved earlier. Most of this increase is a result of a handful of states, but several other states are now reporting faster case growth. Overall, the breadth and magnitude of the outbreaks continue to increase the risk at a national level.

While the headline news is worrying, there are also some positive signs. Case growth in two of the worst affected states, Florida and Arizona, may be peaking, as people and governments there have started to reimpose social distancing and other restrictions. Policy and behavior changes are also underway in other states with outbreaks, but any improvements have not yet shown up in the data. These changes should help constrain further increases, although this will take time. Until then, we can expect to see the numbers continue to worsen.

Growth rate. Over the past week, the daily case growth rate has stayed steady at around 2 percent per day. This suggests that even as the case count continues to get worse, the spread rate may be stabilizing. At this rate, the case-doubling period remains at just over five weeks. This rate leaves the infection curve fairly flat at a national level, although several states are now showing substantially higher growth rates that could threaten their health care systems. This is a rising risk in those states.

Daily testing rate. Despite the rise in infections, testing rates have not increased nearly as much. They are now at around 750,000 per day, roughly steady over the past week. This is still not yet at the level needed to develop a full understanding of the pandemic, despite the outbreaks in multiple states.

Positive test results. We can see this lack of progress by the positive rate on tests. If we look at the percentage of each day’s tests that are positive, lower numbers are better, as we want to be testing everyone and not just those who are obviously sick. The World Health Organization recommends a target of 5 percent or lower; the lower this number gets, the wider the testing is getting. Here, we can see that the positive level continues to run around 8 percent, suggesting that we are still largely just testing the people who are sick. Again, this is likely due to the effects of the state-level outbreaks.

New cases per day. The most obvious metric for tracking the virus is daily new cases. Due to the state-level outbreaks, the number of new cases per day has edged up to more than 70,000 per day, close to the highest point for the pandemic thus far and well above the range of the past several weeks. As noted earlier, the new cases are largely from the outbreak states, although the rest of the country has also shown increases in several states.

Overall, the pandemic continues to be moderate at the national level. But major state outbreaks have risen to the level of threatening local health care systems, and case growth in other states is also picking up. The good news here is that policy and behavioral changes are underway in most of the affected states, which should help mitigate the problem in the next several weeks. While the risk of a national shutdown remains small, the breadth and speed of the state-level outbreaks are something we need to watch closely.

Job market. The economic news is better, with the recovery continuing. The most recent jobs report showed that, for the second month in a row, job creation was strong, with 4.8 million jobs added in June. Layoffs continued to decline, as did the continuing unemployment claims. Consumer confidence has continued to improve. As a consequence of both these factors, the most recent retail sales report showed that consumer retail spending has now recovered to pre-pandemic levels. As this report represents actual spending, it is a solid indicator that the economy continues to improve. We also see this improvement in many other indicators.

Consumers on the move. A concern last week was that the higher-frequency data was showing weakness on the rise in infections. In the past week, however, the data shows that weakness is passing, even as case growth remains high. The chart below illustrates higher-frequency spending data, showing consumer spending down by 6.8 percent from January, which is better than the 9 percent decline last week. While this is still down a bit from the post-pandemic peak, it shows that so far at least the economic recovery may not be derailed by the rebound in new viral cases. 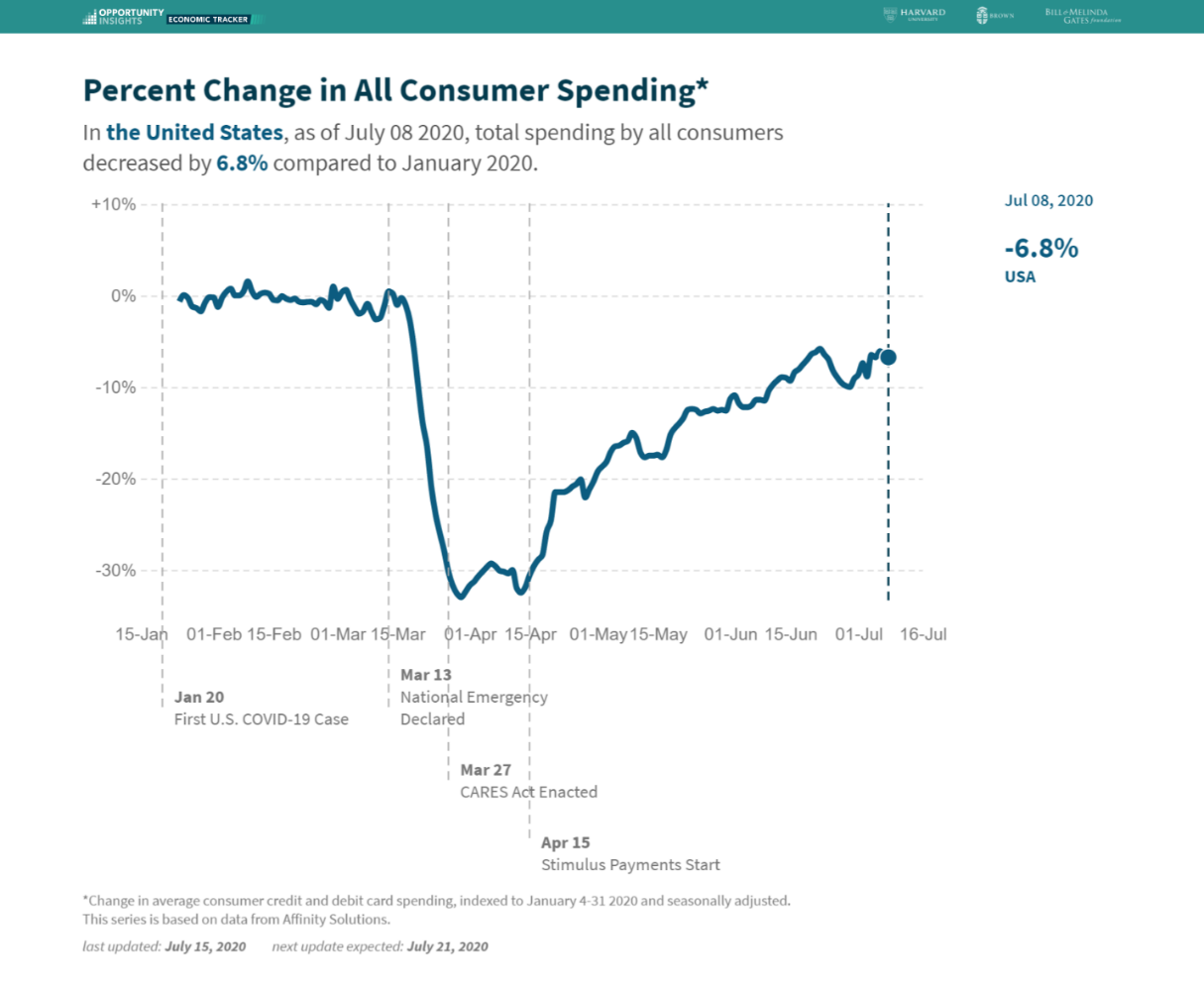 Finally, we can see similar signs that the slowdown in the recovery may be passing in this composite of many indicators from J. P. Morgan. 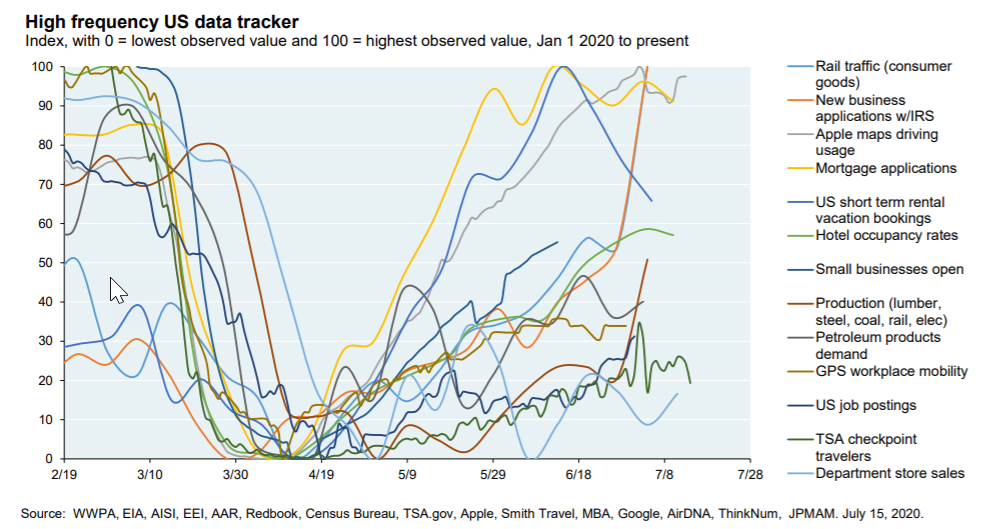 The risks. Although the reopening is going better than expected and is clearly having some positive economic effects, we also certainly face risks. The biggest of these is if the local outbreaks turn into local shutdowns (which would have negative economic effects) or, even worse, a national shutdown. At this point, that is not the most likely case, but it is an increasing possibility.

Another potential risk is that, even with the reopening, consumers will be slow to return and spending growth will not return to what was normal any time soon. So far, this has not happened, despite the outbreaks, but it remains a risk. That said, spending remains strong and has come back after some weakness, so the hard data remains positive.

The Markets: Volatile on Pandemic News

For the financial markets, we continue to see volatility around fears of local outbreaks going national, but markets remain supported by the ongoing positive economic news. Overall, while risks remain, the good news is that as we get more data, markets could end up with a much firmer foundation. While the medical news has been showing rising risks, so far the economic data has been positive on the whole, and markets have responded.

The real takeaway from this past week is that the virus continues to be the major risk. If the outbreaks continue to worsen and spread, it could put the recovery at risk. While there are some signs of that, so far it has not happened. The most likely case appears to be continued recovery, despite the rising medical and economic risks.

Also supporting that idea is the fact that states with outbreaks are starting to take the necessary measures to control the outbreaks. While we will certainly see more damage, the playbook to bring the outbreaks under control was well established earlier in the pandemic and just needs to be implemented. As states do so, we could see the outbreaks subside.

Risks are rising, and we are not yet out of the woods. There are certainly significant risks going forward, with localized outbreaks turning into a national second wave being the most significant. At the same time, in some sense this situation was inevitable and just part of a necessary process to figure out how to reopen effectively while still keeping the virus under control. Even as we go through that learning process—with the consequent pain—the thing to keep in mind is that many of the biggest risks are still moving behind us.