This week, the news was much the same as it was last week. This is actually good news, as things had been getting worse. As such, this stabilization represents progress. It also indicates that, in many states, outbreaks are being contained.

Nationally (as of July 22), the number of new cases was above 70,000, almost the same as a week ago. The daily spread rate has improved a bit, holding below 2 percent per day for the past five days. Similarly, the number of tests has continued to bounce between 750,000 and 850,000 per day, and the positive rate is holding at just over 8 percent. Control measures imposed in multiple states appear to be working. As expected, it will take time to see meaningful improvements.

While the headlines are scary and the national numbers are stable, there are also some positive signs. Case growth in two of the worst affected states, Florida and Arizona, appears to have peaked, as people and governments there have started to reimpose social distancing and other restrictions. Plus, Texas and Georgia are also stabilizing. These changes show that policy measures can constrain further increases, although this shift will take time.

Overall, the national risks remain under control, despite the alarming headline numbers. The base case remains that these outbreaks will be brought under control before they require another national shutdown.

While the medical news has been mixed, the economic news is better, with the reopening still on track, and the financial markets responding to positive developments. Let’s take a look at the details.

Growth rate. Over the past week, the daily case growth rate has ticked down to under 2 percent per day. This movement suggests that even as the case count continues to get worse, the spread is stabilizing. At this rate, the case-doubling period remains at just over five weeks. This leaves the infection curve fairly flat at a national level, although several states are now showing substantially higher growth rates that are threatening their health care systems.

Daily testing rate. Despite the rise in infections, testing rates have not increased nearly as much and are now at around 750,000 to 800,000 per day, roughly steady over the past week. This is still not yet at the level needed to develop a full understanding of the pandemic, despite the outbreaks in multiple states.

Positive test results. We can see this lack of progress by the positive rate on tests. If we look at the percentage of each day’s tests that are positive, lower numbers are better, as we want to be testing everyone and not just those who are obviously sick. The World Health Organization recommends a target of 5 percent or lower; the lower this number gets, the wider the testing is getting. Here, we can see that the positive level continues to run around 8 percent, suggesting that we are still largely just testing the people who are sick. Again, this is likely due to the effects of the state-level outbreaks.

New cases per day. The most obvious metric for tracking the virus is daily new cases. Due to the state-level outbreaks, the number of new cases per day has edged up to more than 70,000 per day, close to the highest point for the pandemic thus far. This range has been steady for the past couple of weeks. The new case growth now comes from a wide range of states. Some of the worst hit have now peaked, while other states are getting worse.

Overall, the pandemic continues to be moderate at the national level. But major state outbreaks have risen to the level of threatening local health care systems, and case growth in other states is also picking up. The good news here is that policy and behavioral changes are underway in most of the affected states, which appear to be moderating case growth. While the risk of a national shutdown remains small, the breadth and speed of the state-level outbreaks are something we need to watch closely.

The Economy: Recovery Continues, Some Signs of Weakness

Signs of weakness. The economic news is better, with the recovery continuing. That said, there are signs of weakness. The most recent initial jobless claims report came in higher than expected, although continuing unemployment claims were still down. Consumer confidence has improved but recently looks to have topped out. And while the most recent retail sales report showed that consumer retail spending has now recovered to pre-pandemic levels, higher-frequency spending data has softened.

Consumers on the move. The chart below illustrates higher-frequency spending data, which shows consumer spending down from the post-pandemic peak in mid-June. This data is something to watch. It shows that while the economic recovery has not been derailed by the rebound in new viral cases, it has been slowed. 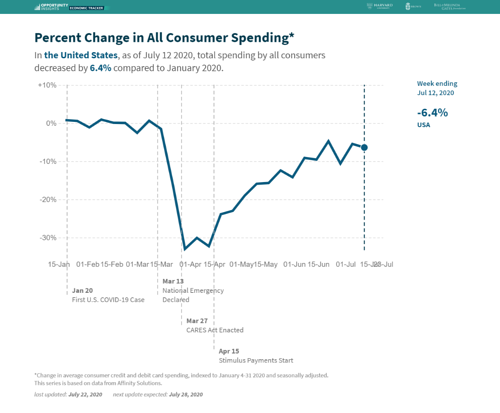 Finally, we can see similar signs of a slowdown in the recovery in this composite of many indicators from J. P. Morgan. 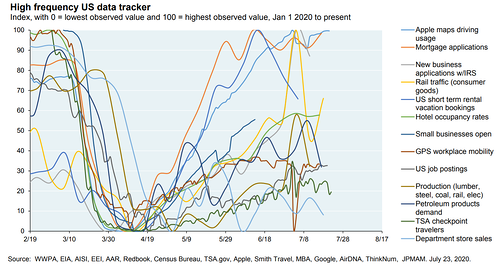 The risks. Although the reopening is going better than expected and is clearly having positive economic effects, we also certainly face risks. The biggest of these is if the local outbreaks turn into local shutdowns (which would have negative economic effects) or, even worse, a national shutdown. At this point, that outcome doesn’t look likely, but it remains a possibility.

Another potential risk is that, even with the reopening, consumers will be slow to return and spending growth will not return to what was normal any time soon. Again, so far, this has not happened despite the outbreaks, but it remains a risk. That said, spending remains strong and has come back after some weakness, so the hard data remains positive.

The Markets: Responding to Better News

For the financial markets, the past week has been a good one. On the medical front, markets have responded to the stabilization in the new case count and encouraging news on vaccine development. On the economic front, corporate earnings are coming in somewhat better than expected. Overall, markets remain supported by ongoing positive developments. While risks remain, the good news is that as we get more data, markets seem to be developing a firmer foundation.

Biggest Risks Still Moving Behind Us

The real takeaway from this past week is that while an expanding second wave is still possible, the data suggests that this wave will be brought under control, just as the first wave was. If the outbreaks continue to worsen and spread, it could put the recovery at risk—but this possibility looks less likely this week than last. In some sense, a second wave was always likely, as part of a necessary process to figure out how to reopen effectively while still keeping the virus under control. We are doing just that, and even as we go through that learning process (with the consequent pain), the thing to keep in mind is that many of the biggest risks are still moving behind us. The most likely case appears to be continued recovery.