The news this week has been a bit of a mixed bag. The bad news is that we’ve seen signs of localized outbreaks in several states. In recent days, Arizona, California, Florida, and Texas have all had significant spikes in cases. But here’s the good news: outside of these and a handful of other states, the virus remains under control. There’s still no sign of a national second wave of infections.

As of June 17, three of those states with data available (i.e., Texas, Florida, and California) reported 10,300 new cases, or almost 40 percent of all new cases across the country. This suggests that conditions continue to improve in most of the remaining 46 states. Although those outbreaks have affected the national numbers, they remain localized, for little national effect on a net basis. The rate of positive tests has stayed low as well, suggesting that the data continues to trend favorably.

In other good news, the reopening is still on track, despite localized outbreaks, as consumers move back into the economy. The retail sales report came in much better than expected, with consumers growing their spending significantly, suggesting that both employment and confidence continue to improve. Other metrics, especially around housing, have also remained very strong.

Overall, from a medical perspective, conditions remain positive, although they are deteriorating in some states and risks are rising. From an economic perspective, the news is also good as the reopening is proceeding smoothly. Let’s take a look at the details.

Growth rate. Over the past week, the growth rate has held between 0.9 percent and 1.3 percent per day, with the most recent in the 1.0–1.2 percent range. At this rate, the curve remains flat, and the virus remains under control at a national level. If that growth rate holds, the number of cases will double about every 10 weeks. While the risks have risen in the past week, as second waves have surfaced in several states, overall the virus remains under control.

Daily testing rate. After a drop, testing rates recovered in past days and look to be increasing steadily. We have seen slowdowns like those of the past week before, and the recovery suggests this rate should continue to improve in the coming weeks.

New cases per day. The most obvious metric for tracking the virus is daily new cases. Due to the state-level outbreaks, the number of new cases per day has edged up to around 25,000 per day. This number is up from last week but still well within the range of the past several weeks. It is also somewhat better than it looks, as it includes the effects of the outbreak states, while most states continue to improve. With the reopening and state outbreaks, other things being equal, we would expect reported cases to increase by more, as we remain in the range of the past several weeks. Stabilization, in this context, continues to be positive overall.

Total active cases. Active case growth has also ticked up over the past week, but it remains below the prior peak.

Overall, the pandemic continues to be largely under control, with no signs yet of a major national second wave of infections despite local outbreaks. This possibility remains something we need to watch for, especially given the risks imposed by the protests. But overall and given the reopening, the news on the pandemic front is still positive.

Job market. While layoffs continue, the damage has peaked and continues to recede. Weekly initial unemployment claims continue to decline from the peak, suggesting that much of the damage has already been done. Continuing unemployment claims have also peaked and remain well below the recent high, despite the continuing layoffs, suggesting many people are starting to move back to work. Also supporting this idea was the most recent employment report, which showed 2.5 million jobs created on a net basis in May, well above the expectation for 7.5 million job losses. As this report represents actual payrolls, it is a solid indicator that the job market is now improving. While there are some questions about the details of the data, the direction—improvement—is well established.

Consumers on the move. We also see this improvement in many other indicators. The most recent retail sales report showed spending up by 17.7 percent, well above expectations, as consumers return to work and shopping. The chart below illustrates higher-frequency spending data, supporting the retail sales report and showing that spending has come back more than halfway from the bottom in two months. This comeback is significant progress and much faster than expected. 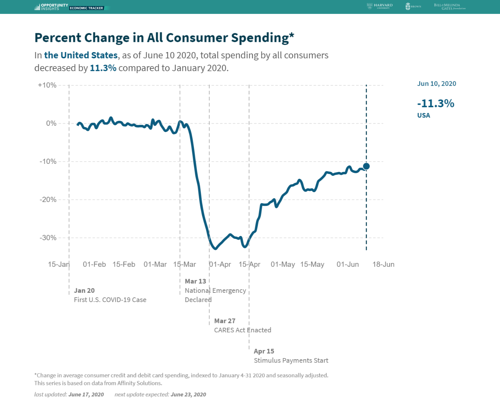 Finally, we can see below a terrific composite of many indicators from J. P. Morgan, which also shows the substantial recovery in many metrics. 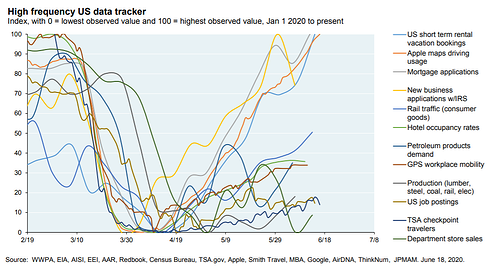 The risks. Although the reopening is going better than expected and is clearly having some positive economic effects, we also certainly face risks. The biggest of these is if the local outbreaks turn into a national second large wave of the pandemic. At this point, that is not the case—the risks remain localized—but it remains something to watch.

Another potential risk is that, even with the reopening, consumers will be slow to return and spending growth will not return to what was normal any time soon. This outcome seems possible, although the signs remain positive. Indeed, most indicators continue to come back faster than expected (as shown above). While risk of a slow spending recovery still exists, the data so far shows that spending is coming back at a substantial pace.

The Markets: Respond to Positive News

For the financial markets, we saw some volatility around fears of local outbreaks going national, exacerbated by the Fed’s downbeat assessment of recovery prospects. But since then, markets have somewhat recovered on the strong retail sales report and the stable national viral numbers, along with the prospect of federal infrastructure spending. Overall, while risks remain, the good news is that as we get more data, markets could end up with a much firmer foundation. Recent data has been positive on the whole, and markets have responded.

Risks on the Rise?

The real takeaway from this past week is that, despite rising risks, progress continues, to the point that a continued successful reopening over the next several weeks looks likely unless something significant changes. We are not yet out of the woods, and there are certainly significant risks going forward—with localized outbreaks turning into a national second wave being the most significant. But the thing to keep in mind is that many of the biggest risks are still moving behind us.