April was a strong month for U.S. equity markets, with the three major indices setting all-time highs. The Dow Jones Industrial Average gained 2.78 percent, and the S&P 500 saw a 5.34 percent increase. The Nasdaq Composite led the way with a strong 5.43 percent gain. Markets were supported by public health improvements and the most recent round of federal stimulus.

April’s better-than-expected earnings reports also helped boost markets. According to Bloomberg Intelligence, as of April 30 with 60.4 percent of companies having reported, the blended first-quarter earnings growth rate for the S&P 500 stands at 45.9 percent. This is significantly better than analyst estimates for a 23.9 percent growth rate at the start of earnings season and marks two straight quarters with earnings growth. While the eye-catching year-over-year growth is partially due to weak comparisons to last year’s first quarter, it is a positive sign that companies are recovering more quickly than analysts expected.

Technical factors also remained supportive for markets in April. All three major U.S. indices remained well above their respective 200-day moving averages throughout the month. This marks 10 straight months where the indices have finished the month above trend. The 200-day moving average is an important technical indicator. Prolonged breaks above or below this level can signal a shift in investor sentiment for an index.

Fixed income markets also had a positive April, driven by moderating long-term interest rates. The 10-year Treasury yield ended the month at 1.65 percent, down from 1.74 percent at the end of March. The Bloomberg Barclays U.S. Aggregate Bond Index gained 0.79 percent.

Although we’ve seen progress on the public health front this year, March showed an uptick in case growth. This raised concerns about a potential fourth wave of the virus. Encouragingly, April saw a return to lower case counts, with the average number of new cases hitting a 2021 low by the end of the month. Testing and hospitalization data showed similar improvements, which also helped calm concerns.

While medical risks declined during the month, there are still reasons for caution. Looking forward, the primary concern is the recent slowdown in the vaccination rate. This slowdown reflects the fact that many of the people who were likely to receive a vaccine already have, and there is still real work to be done to continue to get Americans vaccinated on a national level. Ultimately, though, the longer-term trend remains positive.

The economic news released during the month showed signs of increased activity, driven by continued reopening efforts and the most recent round of federal stimulus checks. After March’s growth in the pace of hiring, April saw steadily declining numbers of initial unemployment claims. This was an encouraging sign that the improvements with the economy and public health continued to support a faster labor market recovery.

Consumer confidence is now back near pre-pandemic levels. We saw the positive effects that improved confidence can have on spending, as March’s retail sales and personal spending reports both came in above expectations. The retail sales report was especially encouraging—the 9.8 percent rise in sales was the second-largest monthly increase on record, trailing only last May’s reopening-fueled surge in spending. We also saw the pace of personal consumption growth increase during the first quarter. This contributed to faster economic growth to start the year.

Businesses saw improved confidence and increased spending during the month as well. As you can see in Figure 1, the ISM Composite index of business confidence surged in March. This widely followed measure of manufacturer and service sector confidence has increased notably since initial lockdowns were lifted last year. The increase in March brings the index to its highest level since records began in 1997. 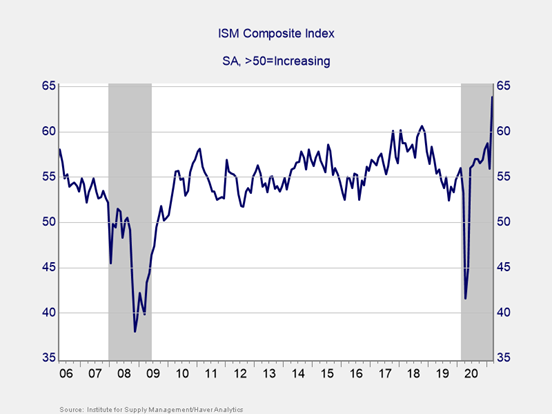 The housing sector continued to show strength. Home builder confidence remained high in April, and the pace of new home construction and sales picked up in March. Housing starts and new home sales both reached levels not seen since 2006 in March. Home builders continue to ramp up the pace of construction to meet high levels of home buyer demand, despite rising material and labor costs. There are signs that low levels of supply and rising prices are starting to serve as a headwind for faster sales growth. Compared with the pre-pandemic sales rate, however, sales near current levels would still represent an increase and indicate that home buyer demand remains strong.

While we made real progress with the economy and public health during the month, risks to the ongoing recovery remain. The slowdown in the vaccination rate remains one of the primary risks to a return to normal, but we’re seeing progress, even if the pace has slowed.

Economic risks continued to diminish during the month, with improvements in hiring and confidence leading the way. The passage of the stimulus bill in March also helped keep the economy running smoothly as we ramped up vaccinations. The economy appears poised for growth, which should support a return to normal once we get the pandemic brought under control.

Although risks remain, we are likely past the worst of the economic and public health damage. We may be set for a return to more normal economic conditions sooner rather than later, and it’s possible we’ll see faster growth throughout the year. With that said, the pace and path of the recovery are still uncertain, which could lead to volatility. A well-diversified portfolio that matches investor goals to timelines remains the best path forward for most. If concerns remain, contact your financial advisor to discuss your financial plan.