It was a rocky start to the spring for markets, with all three major U.S. indices ending the month in the red. The S&P 500 lost 8.72 percent in April while the Dow Jones Industrial Average (DJIA) dropped 4.82 percent. The Nasdaq Composite saw the largest drop as the index’s heavy weighting toward technology companies led to a 13.24 percent decline in April.

These losses offset the gains we saw in March and came despite improving fundamentals during the month. According to Bloomberg Intelligence, as of April 29, 2022, with 55 percent of companies having reported actual earnings, the average earnings growth rate for the S&P 500 in the first quarter sits at 8.7 percent. This is up from the 5.2 percent growth that was expected at the start of earnings season and indicates businesses continued to outperform analyst outlooks in the first quarter. Over the long run, fundamentals drive market returns and this is a good sign for future performance.

While fundamental factors were supportive during the month, technical factors were not. All three major U.S. indices finished below their respective 200-day moving averages, marking three consecutive months where both the DJIA and Nasdaq finished below trend. The 200-day moving average is an important technical trendline, as extended periods above or below trend can signal shifting investor sentiment for an index. While it’s too soon to say if investors have soured on U.S. markets based on technicals alone, the continued weakness in April is a potential cause for concern and bears monitoring in the months ahead.

The story was much the same for international equities last month. The MSCI EAFE Index fell 6.47 percent and the MSCI Emerging Markets Index dropped a similar 5.55 percent. Concerns about slowing global growth and the rising lockdown measures in China weighed on international investors. Technicals were also weak, as both international indices finished the month well below their respective 200-day moving averages. Both the developed and emerging market indices have spent most of the year below trend, signaling potential investor concern for international markets.

Although medical risks have driven a lot of market uncertainty over the past two years, we’ve seen those risks shift to start 2022. While average Covid-19 daily new case growth increased modestly during the month, it remained well below the recent Omicron-induced highs we saw in January. Future waves of infection are a possibility that should be monitored, but high levels of vaccination and prior exposure should help limit the impact of any future waves here in the U.S. We aren’t yet out of the woods when it comes to pandemic-driven health risks but the worst of the economic disruption is likely behind us.

Investors have recently become less focused on medical risks and more focused on the challenges associated with returning to normal economic conditions. The most notable challenge we’re currently facing is the high level of inflation throughout the economy. Both consumer and producer prices have seen steady upward pressure through the start of the year, caused by tangled global supply chains, rising material and labor costs, and high levels of consumer and business demand. The war in Ukraine also added to global inflationary pressure, as the uncertainty created by the conflict caused energy and food prices to surge.

To combat rising prices, the Federal Reserve (Fed) has started to tighten monetary policy by increasing interest rates. The Fed kicked off the current rate hiking cycle by announcing a 25 basis point interest rate hike at its March meeting, followed by a 50 basis point hike at the May meeting. Looking forward, the Fed is expected to increase rates throughout the rest of the year. While this is a good sign that the Fed sees the economy as healthy enough to withstand the headwind from higher interest rates, higher rates can lead to lower stock and bond prices, as we’ve seen.

The Fed is expected to raise rates at each of its remaining five meetings this year; the path and pace of these rate hikes, however, is not set. The central bank will continue to monitor economic health as they try to normalize policy, with a heavy focus on inflation and the job market. The Fed is expected to have a large influence on markets throughout the hiking cycle, especially if the central bank surprises investors with the timing and size of future hikes.

While rising rates can be a headwind for the economy and markets, it’s important to note that economic fundamentals are still showing signs of improvement. The job market has made an impressive recovery over the past two years, as seen by the swift improvement to the unemployment rate since the end of initial lockdowns. As you can see in Figure 1, March’s 3.6 percent unemployment rate was the lowest since the start of the pandemic and falls in line with pre-pandemic levels. The April job report showed that the unemployment rate remained unchanged during the month. This recovery was much faster than the labor market recovery following the great financial crisis and highlights the very real improvements we’ve seen for the economy since the start of the pandemic. 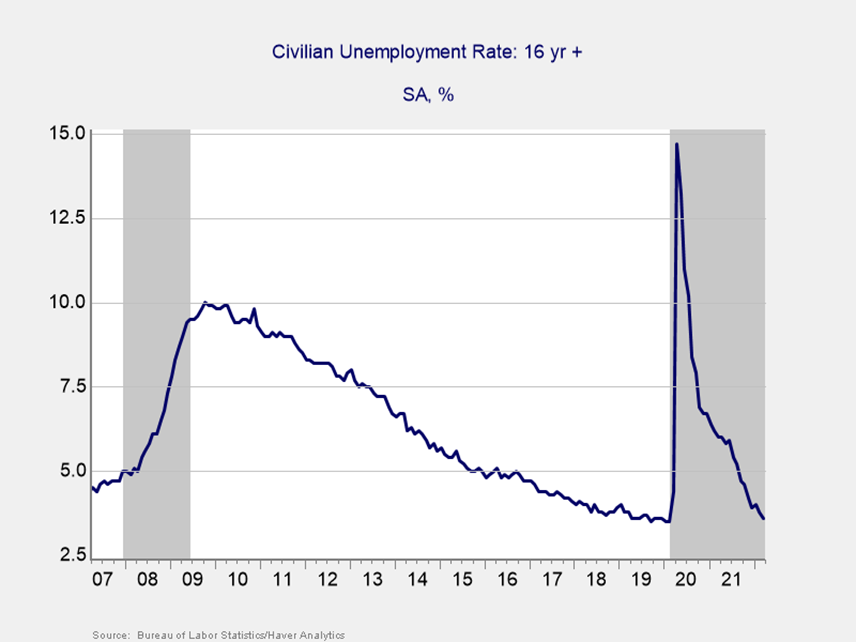 The strong job market helped support income and consumer spending growth, as both reports came in above economist estimates. Retail sales growth also showed signs of improvement during the month. While the first quarter GDP report showed that the economy slowed to start the year, this was largely a technical result due to temporary factors caused by international trade in the first quarter. The underlying data was much more encouraging; the personal consumption portion of the report showed that consumption growth increased in the first quarter compared to the fourth quarter of last year.

There was also good news from the housing sector last month. The March building permits and housing starts reports both came in above expectations, bringing the pace of new home construction to its highest level since 2006. The continued strong pace of construction was an encouraging sign that home builders still remain confident and willing to invest in new construction. The supply of existing homes for sale remains very low on an historical basis, so any new home construction growth is a healthy development for this important sector of the economy.

Risks for Now but Continued Growth Ahead

The market drawdowns in April were a reminder that very real risks remain for markets, driven in large part by the uncertainty that comes with getting the economy back on more normal footing. The start of the Fed’s hiking cycle in March and the increased expectations for higher rates throughout the year were a prime example of the way shifting expectations can rattle markets. Additionally, the uncertainty from the war in Ukraine could add to future selloffs, especially if we see the conflict worsen in the months ahead.

With that said, the most likely path forward for the U.S. economy remains continued growth. The economic fundamentals remain healthy, driven by the improvements that we’ve seen for the job market over the past two years. Consumer demand remains strong despite the headwinds created by high levels of inflation. That’s not to say that we won’t see economic setbacks in the months ahead; however, the improving fundamentals should support continued growth over the intermediate to long term.

As always, the potential for short-term market selloffs remains. As we’ve seen so far this year, just because economic fundamentals are improving, doesn’t necessarily mean that markets have to show similar improvements over the short term. It’s quite possible that we’ll see risks shift again in the upcoming months, which could lead to additional volatility. Given the short-term uncertainty, a well-diversified portfolio that matches investor goals and timelines remains the best path forward for most. If concerns remain you should reach out to your financial advisor to discuss your financial plan.