Markets continued to rally in August, with all three major U.S. indices setting new record highs. While there was some mid-month volatility, markets were able to bounce back swiftly toward month-end. The Dow Jones Industrial Average gained 1.50 percent while the S&P 500 notched a 3.04 percent return. The Nasdaq Composite led the way with a 4.08 percent return.

These solid results came alongside improving fundamentals. According to Bloomberg Intelligence, as of August 27, the blended earnings growth rate for the S&P 500 in the second quarter was 95.9 percent (with 98 percent of companies having reported actual earnings). While the large year-over-year earnings growth figure is partially due to comparisons to last year—when lockdowns negatively affected second-quarter earnings—the current growth rate is well above analyst estimates at the start of earnings season for a 65.9 percent increase. Improving fundamentals drive long-term performance, so this better-than-expected result is a positive sign for businesses and markets.

Technical factors were also supportive as all three major U.S. indices spent August well above their respective 200-day moving averages. The 200-day moving average is an important technical signal; prolonged breaks above or below this level can signal shifting investor sentiment for a given market. Encouragingly, this marks 14 consecutive months with continued technical support for U.S. markets, as investors have remained positive about domestic economic recovery since lockdowns were lifted.

International markets had a solid month as well. The MSCI EAFE Index tracked U.S. markets for much of the month and managed a 1.76 percent return. The MSCI Emerging Markets Index did even better, bouncing off recent weak performance with a gain of 2.65 percent.

Despite the largely positive month for markets, medical risks continued to rise. We saw the number of new and total COVID-19 cases climb as the Delta variant continued to drive infections throughout the country. Hospitalizations and positive test rates also increased notably; however, we did see an uptick in new vaccinations toward month-end.

Despite rising medical risks, the effects of the worsening public health situation appear to be muted—from a market and economic perspective—compared with previous waves of infection. Unlike last spring, we have not seen a rush to impose large-scale lockdowns or business restrictions in response to the current wave. Unless we return to nationwide lockdowns (which seems unlikely at this time), rising medical risks do not necessarily mean we will see a corresponding increase in market or economic risks.

Most of the economic updates released in August showed continued improvement, which was encouraging given rising medical risks. July’s employment report highlighted the strength of the ongoing labor market recovery, with 943,000 jobs added. This was more than economists had forecasted and the most jobs added in a month since August 2020. And, although the August employment report, which was released on September 3, missed expectations—only 235,000 jobs were added versus an expected 733,000—it marked the eighth straight month of job growth.

We also saw continued improvement in the number of initial jobless claims, with numbers setting a new pandemic-era low. As you can see in Figure 1, we’ve made substantial progress in getting the number of weekly layoffs down toward more normal levels over the past year. Continued labor market recovery in July and August was an encouraging signal that the momentum from reopening efforts earlier in the year continued to drive further economic improvement. 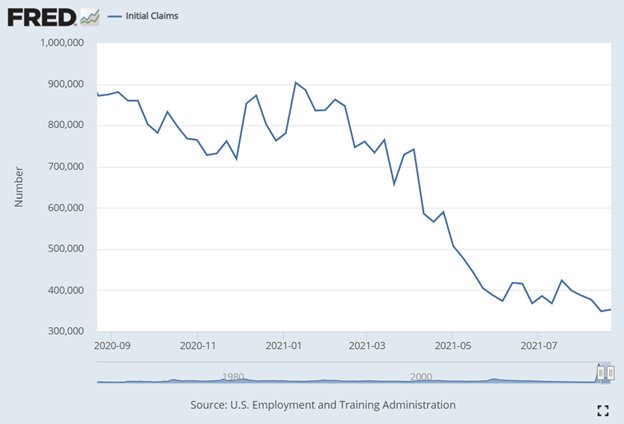 Consumer income and spending also showed continued improvement, with the latter increasing by 0.3 percent while the former increased by a better-than-expected 1.1 percent. The growth in personal spending was especially encouraging, as it marks the fifth consecutive month of increased spending, with much of the growth driven by greater spending on services. Consumer spending accounts for most of the country’s economic activity, so this resilience despite potential pandemic-related headwinds is reassuring.

Another area where we saw improvements was the housing sector. Low mortgage rates and shifting homebuyer preference for larger properties due to the pandemic have served as a tailwind for faster housing sales since initial lockdowns were lifted last year (although a dearth of homes for sale and rising prices have hindered sales recently). The pace of existing home sales came in above expectations for July and hit a four-month high. The housing market was supported by increased homes available for purchase, which reached their highest level since October 2020 in a sign that the housing market is starting to normalize following a pandemic-induced surge in sales. The continued high level of homebuyer demand despite record high prices is another encouraging sign that consumers remain willing and able to spend on big-ticket items, regardless of pandemic-induced uncertainty.

Businesses also showed promising signs of continued investment. The July durable goods orders report showed that core durable goods, which are often viewed as a proxy for business investment, increased more than expected. Businesses have been hiring and spending at a strong clip over the past few months to meet high consumer demand levels, and continued core durable goods orders growth was another sign that spending remains solid. With business confidence well above pre-pandemic levels and consistent consumer demand, business spending is expected to be robust in the months ahead.

As we saw in August, risks to ongoing economic recovery remain. The recent surge in COVID cases is a sobering reminder that we are not out of the woods yet in terms of containing the pandemic; however, its relatively minimal impact on markets and economic recovery is a welcome development and an encouraging sign for future growth. In the months ahead, rising medical risks could lead to further restrictions at the state and local level—which could negatively affect consumer confidence and spending. Even with all this, however, it’s still fair to say we are in a much better place than even a few months ago.

Outside the pandemic, negotiations in Washington regarding the size and timing of the next round of federal spending continue, which creates uncertainty and could lead to further volatility if investor expectations aren’t met. Congress also needs to address the debt ceiling, as the Treasury is currently using temporary emergency cash-conservation measures following the expiration of the two-year debt ceiling suspension at the end of July. While the likely outcome is an increase in the debt ceiling or another temporary debt limit suspension, the specter of a potential federal default should be monitored.

Ultimately, the likely path forward is continued economic recovery in the months ahead, although real risks to this outlook do persist. These risks could drive uncertainty in the short term, meaning a well-diversified portfolio that matches investor goals and time horizons remains the best path forward for most. As always, you should speak to your financial advisor to review your strategy if you have concerns.