After a weak January, equity markets rebounded in February, despite some late-month volatility driven by a spike in U.S. interest rates. The S&P 500 gained 2.76 percent in February, while the Dow Jones Industrial Average increased by 3.43 percent. The heavily technology-weighted Nasdaq Composite gained 1.01 percent.

These positive results coincided with improving fundamentals during the month. According to Bloomberg Intelligence, as of February 26 with 96 percent of companies having reported, the average fourth-quarter earnings growth rate for the S&P 500 stands at 5.8 percent. This is much better than analyst estimates for an 8.8 percent drop. If this result holds, it would mark the first quarter with earnings growth since the fourth quarter of 2019. Analysts are forecasting continued growth throughout the year, which would likely support markets.

Technical factors also remained supportive in February. Despite the month-end volatility, all three major indices spent the entire month well above their respective 200-day moving averages for the eighth month in a row, indicating continued healthy levels of investor support for markets. The 200-day moving average is an important technical signal, as prolonged breaks above or below this line can indicate shifting investor sentiment for an index. The continued technical support for markets indicates that investors have a favorable outlook for U.S. equities.

The story was similar internationally. The MSCI EAFE Index rebounded from a volatile January, gaining a solid 2.24 percent in February. The MSCI Emerging Markets Index gained 0.77 percent. Both major international indices saw month-end volatility that offset gains from earlier in the month.

Fixed income markets had a challenging February, driven by the rise in long-term interest rates. The 10-year U.S. Treasury yield rose from 1.09 percent at the start of the month to 1.44 percent at month-end. This growth in rates was partially due to rising inflation expectations, but mostly, it was the result of a healthy economic recovery. The increase hit fixed income prices, with the Bloomberg Barclays U.S. Aggregate Bond Index declining 1.44 percent.

High-yield fixed income, which is typically less affected by changes in interest rates and more correlated with equity markets, had a positive month. The Bloomberg Barclays U.S. Corporate High Yield Index gained 0.37 percent in February. High-yield spreads narrowed and now sit at their lowest level since the pandemic began.

The news on the public health front in February was quite positive. The U.S. made solid advances in bringing the pandemic under control, and mass vaccination efforts continued to pick up steam. The number of new cases per day dropped by roughly half throughout the month, and we are now at levels last seen in October. We saw improvement in the number of hospitalized patients and the positive test rate as well. There were some signs toward month-end that the pace of improvement may have begun to slow, but the progress made in February was more than welcome.

One factor in this improved public health picture was the increase in vaccinations. An estimated 15 percent of the population had received at least one shot by month-end. The pace should accelerate going forward, given the recent approval of the single-shot Johnson & Johnson vaccine. The progress in February was an encouraging signal that we are heading down the right path.

While the progress has been substantial, risks remain. We have yet to see the more infectious strains of the coronavirus in the U.S., but the possibility exists. Although case counts and hospitalizations are down, the slowing pace of improvement is a concern. We’re not out of the woods yet, but there is light at the end of the tunnel.

The market and public health progress came amid steadily improving economic data. Consumer confidence and spending reports were especially encouraging. Retail sales and personal spending surged in January, driven by the improving public health situation and the federal stimulus checks. Both measures of consumer spending saw their best month of growth since last June, when the lifting of initial lockdowns and the first round of stimulus helped spur a swift rebound. These strong results were an encouraging sign for economic growth to start the year.

Another area where we saw faster growth was the housing sector, which continued to show strong sales. January’s existing and new home sales grew by more than expected. On a year-over-year basis, both existing and new home sales are up by roughly 20 percent. As you can see in Figure 1, the pace of existing home sales now sits near levels last seen in 2006. Record-low mortgage rates and shifting home buyer preferences have led to a surge in demand over the past year. Looking forward, low numbers of homes for sale, rising prices, and increasing mortgage rates may serve as headwinds for faster sales growth. But even if sales remain near current levels, they would still signal a strong housing market. 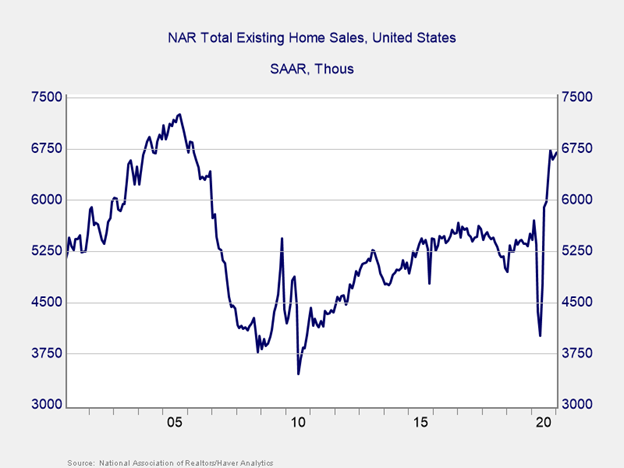 Business confidence and spending also showed signs of faster growth during the month. Both manufacturing and service sector confidence started the year well above pre-pandemic levels. Business spending showed continued improvement, with January’s durable goods orders report coming in above economist estimates. This was an especially encouraging result, as it brought the pace of durable goods orders above pre-pandemic levels.

With business confidence and spending remaining healthy to start the year and consumer data showing similar signs of improvement, the economic picture looks strong. There is hope for even faster growth throughout the year as we see more positive public health news.

Risks Remain but Are Receding

While there are reasons to be hopeful for faster growth and continued market appreciation, risks remain. On the public health front, we still face the risk of more contagious strains of the coronavirus. We have not seen a noted increase in infections on a national level, but this is a risk that should be watched, especially in the short term, as we continue to ramp up vaccination efforts across the country.

On the economic front, while momentum is good, unemployment is still very high, and there is some uncertainty about the size and timing of the next federal stimulus. The economy appears to be positioned to weather the pandemic over the next few months—once we go beyond that, though, the risks rise.

Ultimately, February showed encouraging signs of improvement for markets, the economy, and public health. With that said, there is still uncertainty about the path and pace of the recovery going forward, which may cause additional short-term volatility. As such, a well-diversified portfolio that matches investor goals and timelines remains the best path forward for most. If concerns remain, contact your financial advisor to discuss your financial plan and strategy.