Mixed start to year for markets

Markets took a bit of a break to start the year, as volatility at month-end, driven by fears of a more contagious variant of the COVID-19 virus, pulled back earlier gains. The S&P 500 ended the month down 1.01 percent, and the Dow Jones Industrial Average dropped 1.95 percent. The Nasdaq Composite did better, finishing the month with a 1.44 percent gain, but even this technology-heavy index was hit by late-month volatility.

These weak results came despite improving fundamentals. According to Bloomberg Intelligence, as of January 29 with 37 percent of companies having reported, blended earnings for the S&P 500 in the fourth quarter are down 1 percent. This is much better than the 8.8 percent decline analysts expected at the start of earnings season. Businesses are continuing to adapt to the pandemic, learning how to operate and make money despite the constraints. Given the better-than-expected results in the fourth quarter, there is very real hope we will see substantial earnings growth this year, which would support markets going forward.

Technical factors also remained supportive to start the year. Despite the weak monthly results, the three major indices remained well above their respective 200-day moving averages. The 200-day moving average is an important technical signal, as prolonged breaks above or below this line can indicate shifting investor sentiment for an index. January marks seven consecutive months with all three indices finishing above their trend lines.

The story was much the same for international markets. The MSCI EAFE Index was also hit by volatility, ending January down 1.07 percent. Emerging markets held up better, with the MSCI Emerging Markets Index gaining 3.09 percent. Technically, both indices were well supported, finishing above the 200-day trend line for the third month in a row.

Third wave of pandemic may have crested

While the market news was mixed, the medical news was much better. The major metrics for the pandemic all improved significantly in January, signaling that the third wave may have peaked. The number of new cases per day fell throughout the month and now sits at levels last seen in November. There were similar declines in the number of hospitalized patients and the positive test rate toward month-end.

One reason for the improvement is likely the significant progress made with vaccinations. After some initial distribution hiccups, nearly 10 percent of the U.S. population had received at least a single dose of a vaccine at the end of January. This was up from less than 1.5 percent at the start of the month. There is still a long way to go, but the progress made in January is an encouraging sign that we are on the right path.

The major risk at this point is an uptick in infections caused by a more transmissible strain of the virus, which has been seen in several countries. At the moment, however, there are no signs of this, and the trends remain positive. So, we will likely see further progress in containing the pandemic as vaccinations continue.

Economic damage also may have peaked

The year started with the economic damage from the third wave mounting. Jobs—along with consumer confidence and spending—dropped at year-end, while layoffs rose again. Although the fourth quarter as a whole showed growth, there was a clear slowing in December. In January, however, there were signs that the worst of the damage may be moving behind us.

Consumer confidence and spending figures held up much better than they did last April, indicating that consumers are expecting things to improve. With states beginning to reopen, layoffs have declined, creating a stronger job market. The federal stimulus payments are hitting bank accounts, which should help workers survive until their jobs return. We are now seeing consumer confidence stabilize and even start to recover, and this has also boosted the higher-frequency spending data. While risks remain, here, too, we may have seen the worst of it.

Business confidence and investment saw a surge in the fourth quarter. This is shown by the Institute for Supply Management (ISM) Composite index, which ended 2020 at a two-year high. As you can see in Figure 1, this gauge of business confidence has rebounded notably since hitting an 11-year low in April of last year, highlighting the successful efforts from business owners to adapt to life during a pandemic. 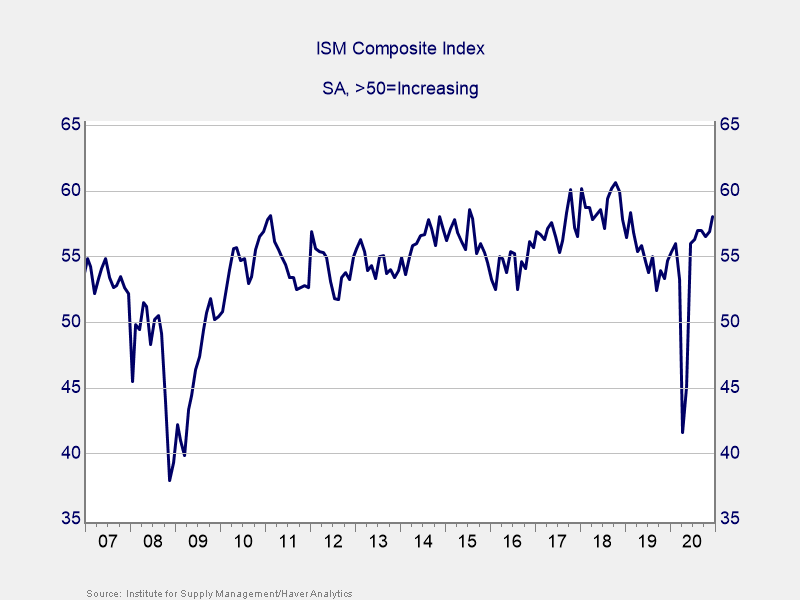 The first estimate of fourth-quarter gross domestic product growth showed that the economy grew at a healthy annualized rate of 4 percent in the final quarter of the year. Encouragingly, we’re seeing signs that the economic recovery might be picking up steam.

Risks remain even as things get better

There are certainly reasons to have hope looking forward, but there are also very real risks. We’ve made progress in controlling the pandemic, but the possibility of a more contagious variant of the virus is a serious concern. While the vaccination improvements in January should limit that risk, it can’t be easily dismissed.

The economic risks are largely political in nature and center around whether and how much more stimulus will be available. Senate Republicans and the White House have proposed rival stimulus packages that vary greatly in size, and market participants will be closely monitoring developments. Foreign political risks also remain, given the strained trade relations between the U.S. and China.

Overall, January painted the picture of a pandemic slowly coming under control and an economic recovery that is struggling to accelerate. The likelihood of short-term volatility remains, especially if we see rising case counts or a meaningful delay in the next round of federal stimulus, but the longer-term trends are now positive.

Given the uncertainty, especially over the short term, a well-diversified portfolio that matches investor goals and timelines remains the best path forward for most. If concerns remain, contact your advisor to discuss your financial plan.