Equity markets had a rough start to the year, with concerns about inflation and rising case growth in the first half of January leading to sell-offs for all three major U.S. indices. The S&P 500 lost 5.17 percent in January despite a late-month rally that helped offset declines from earlier in the month. The Dow Jones Industrial Average (DJIA) and the technology-heavy Nasdaq Composite also experienced a partial rebound at month-end, but they still lost 3.24 percent and 8.96 percent, respectively.

Despite the negative returns, fundamentals showed signs of improvement during the month. According to Bloomberg Intelligence, as of January 28, with 27 percent of companies having reported earnings, the average earnings growth rate for the S&P 500 was 23.7 percent in the fourth quarter. This beat analyst estimates at the start of earnings season for a more moderate 19.8 percent increase. If estimates hold, this would mark the fourth consecutive quarter with earnings growth exceeding 20 percent. Although some of this strong year-over-year growth can be attributed to base effect comparisons to 2020, the anticipated strong earnings growth indicates that businesses continued to successfully adapt in a pandemic-era economy. Over the long term, fundamentals drive market performance, so the sustained earnings growth in the fourth quarter is a good sign for markets.

Technical factors were mixed for major U.S. markets. Despite the late-month rally, the Nasdaq ended below its 200-day moving average, while the S&P 500 and DJIA barely finished above trend after falling below this important technical level earlier in the month. The 200-day moving average is a widely monitored signal; prolonged breaks above or below it can be a sign of shifting investor sentiment for an index. The mixed results marked the first time one of the three major U.S. indices finished below trend since mid-2020, so this will be an important area to watch to determine if investor sentiment has soured on U.S. markets or if recent declines are just healthy market volatility.

The story was similar internationally, though sell-offs were slightly more modest. The MSCI EAFE Index declined 4.83 percent, with most of the decline coming near month-end. The MSCI Emerging Markets Index held up a bit better but still lost 1.89 percent in January. Technicals for international markets were challenging, with developed and emerging market indices ending the month well below their respective 200-day moving averages. This marks seven consecutive months with emerging markets below trend, indicating that concerns about a stronger dollar and slowing Chinese growth have weighed on investors.

Fixed income markets also had a rough start to the year, driven largely by rising interest rates. The 10-year U.S. Treasury yield increased from 1.52 percent at the end of December to 1.79 percent at the end of January due to rising expectations that the Federal Reserve (Fed) will start raising interest rates this year. The Bloomberg U.S. Aggregate Bond Index declined 2.15 percent.

High-yield fixed income, typically driven less by changes in interest rates and more by equity performance, also had a challenging start to the year. The Bloomberg U.S. Corporate High Yield Index dropped 2.73 percent in January. High-yield credit spreads increased from 3.10 percent at the start of the month to 3.61 percent by month-end, signaling rising investor concern and softening demand for higher-yielding, riskier securities.

Despite market turbulence, the public health situation showed signs of improvement. The average number of daily new cases peaked mid-month and swiftly declined toward month-end. We ended January with average daily new cases down by more than 40 percent compared with the peak of the Omicron wave, which is an encouraging sign that we have made progress in containing this virulent Covid-19 variant. Part of the recent success in lowering new case counts is likely due to improving vaccination rates and rising natural immunity.

We ended the month with 64 percent of Americans fully vaccinated and an additional 12 percent having received at least one shot. Booster shots for fully vaccinated individuals likely also played a role in combating the most recent wave of infections. Looking forward, this vaccination level should help minimize the economic impact from potential future waves of infection.

Ultimately, this most recent wave showed that we’ve learned from our experience and have successfully adapted to pandemic-era life. With that being said, though medical risks have declined from recent highs, we are far from out of the woods in terms of the pandemic. Medical risks should still be acknowledged and monitored in the months ahead.

The economic data releases in January largely showed that the economic recovery slowed at year-end, which is understandable given rising medical risks. With increased case growth and concerns about inflation, consumer confidence and spending declined in December. Although the drops were slightly disappointing, it’s quite possible that declining medical risks and inflationary pressure will lead to a rebound in spending in the new year. This will be an important area to monitor in the months ahead since consumer spending drives most economic activity in the country.

Business confidence and spending also slowed at year-end, but both remain in relatively good shape. Business confidence ended the year well above pre-pandemic levels with business owners largely shrugging off the headwinds from Omicron and focusing on trying to meet still-high levels of consumer demand through increased hiring and investment. High levels of business confidence have historically supported higher levels of spending, and we saw the positive impact from increased business spending in the fourth-quarter gross domestic product (GDP) report. The better-than-expected growth rate during the quarter was primarily driven by rising business inventories; companies continued to invest to try to meet demand throughout the quarter by replenishing diminished supply. Overall, business confidence and spending held up relatively well despite rising headwinds at year-end, which is an encouraging sign that we may be poised for faster growth ahead if headwinds dissipate.

One sector that saw notable growth to finish the year was housing. Home buyer demand remained strong at year-end, which was impressive given low inventory, rising prices, and modestly higher mortgage rates during the month. Home builder confidence also remained elevated, which supported a surge in new home construction. As you can see in Figure 1, housing starts finished the year at their second-highest level since the pandemic began, and building activity remains well above pre-pandemic levels. As long as we continue to see high levels of home buyer demand, home builder confidence and new home construction are expected to remain in healthy expansionary territory. 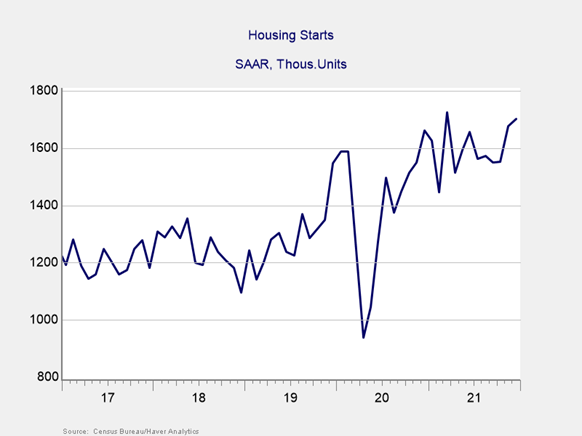 As January revealed, there are several potential risks for markets and the economy that should be recognized. One of the major drivers of the uncertainty and market turbulence was the Fed’s mid-January meeting, at which the central bank indicated interest rate hikes would likely come sooner rather than later.

Given the comments from Chairman Jerome Powell at his post-meeting news conference, the Fed is widely expected to hike the federal funds rate at its March meeting. If the Fed does hike rates in March, it would be the first rate increase since the start of the pandemic, when the central bank cut interest rates to virtually zero. Although an interest rate hike would be an encouraging sign that the Fed is comfortable with the health of the economy, any changes to monetary policy could lead to market volatility and should be monitored.

We also saw rising international risks during the month, contributing to the market pullback. Headline GDP growth in China missed expectations, leading to fears of a slowdown for global economic growth. This is on top of worries about the country’s beleaguered property development sector. In addition, concerns over a potential conflict between Russia and Ukraine added to the uncertainty.

Finally, domestic political uncertainty remains as well. Washington continues to debate the Build Back Better Act, which could lead to a surge in fiscal stimulus and increased tax rates if passed. Ongoing negotiations on the act between the Biden administration and Congress will likely serve as another unpredictable variable until an agreement is reached.

Overall, while January was rough for markets, the economy remains in relatively good shape to start the year. Although risks have shifted from mainly medical to economic and political over the past month, the economy showed continued growth, and market fundamentals remain healthy. For now, the most likely path forward is for more growth and recovery in the months ahead, but uncertainty remains. Given that, a well-diversified portfolio that aligns investor goals and timelines remains the best path forward for most. As always, if you have concerns, reach out to your financial advisor to review your financial plans.