July marked a strong start to the second half of the year for markets, as all three major U.S. equity indices ended the month in positive territory. The Dow Jones Industrial Average (DJIA) gained 2.51 percent for the month, and the S&P 500 impressed with a 5.64 percent return. The Nasdaq Composite, with its heavy weighting to technology, was the leader, rising by 6.85 percent.

These positive returns were boosted by better-than-expected fundamentals during the month. According to Bloomberg Intelligence, at the end of July, the quarterly earnings growth rate for the S&P 500 in the second quarter stood at –35 percent. This is significantly better than initial estimates for a 43.4 percent decline. The results were widespread, as 83.4 percent of companies that have reported earnings for the quarter surpassed analyst expectations. If estimates hold, this would mark the best quarter for positive earnings surprises for the index in 27 years. Although the decline during the quarter is concerning, these results, combined with analyst expectations for a return to earnings growth by the first quarter of 2021, indicate that companies were able to withstand the economic damage in the second quarter better than expected.

Technical factors were also supportive for U.S. equity markets during the month. All three major indices finished above their respective 200-day moving averages for the first time since January. Technicals have been mixed throughout the pandemic. The DJIA took longer than the S&P 500 and Nasdaq to recover after hitting lows in March. The 200-day trend line is an important technical signal that is widely followed by market participants. Prolonged breaks above this trend line could indicate a longer-term shift in investor sentiment.

The story was much the same for international markets. The MSCI EAFE Index gained a solid 2.33 percent during the month, bolstered by a new stimulus package for the European Union. Emerging markets did even better, with the MSCI Emerging Markets Index rising by 9.03 percent. Emerging markets were supported by a weakening dollar, as the Dollar Spot Index fell to its lowest point in more than two years in July.

Technicals for international markets were mixed during the month. The MSCI EAFE Index spent much of July above its 200-day moving average trend line. Volatility at month-end brought the index below trend for the sixth month in a row, however. The MSCI Emerging Markets Index spent virtually all of July above its 200-day moving average. It ended the month above trend for the first time since the start of the pandemic.

Fixed income markets had a positive month. The 10-year Treasury yield fell from 0.69 percent at the start of July to 0.55 percent at month-end. This brought the 10-year yield to its lowest level since March and near all-time lows. Shorter duration bonds also saw yields fall, with both the 3-year and 5-year yields setting new intraday lows near month-end. Declining yields led the Bloomberg Barclays U.S. Aggregate Bond Index to a gain of 1.49 percent during the month. High-yield bonds were also strong, with the Bloomberg Barclays U.S. Corporate High Yield Index gaining 4.69 percent. High-yield spreads dropped to their lowest level since the start of the pandemic.

July was a mixed bag on the pandemic front, as measures to combat localized outbreaks led to some signs of progress by month-end, despite rising national case counts. While new and total case numbers remain high, the daily growth rate showed improvement later in the month. It fell from around 2 percent to approximately 1.5 percent by month-end. This indicates that the pausing or rolling back of reopening efforts in certain states is starting to help control the spread of the virus.

We continued to see improved testing capability, with average daily new tests increasing to around 800,000 by the end of the month. We still don’t have enough daily tests to get a full understanding of the pandemic, however. We can see the impact of this in the positive test ratio, which remains elevated at around 8 percent. The World Health Organization recommends a target positive test rate of 5 percent.

Ultimately, although case counts remain high, July’s public health results were encouraging. They showed stabilization and, in some cases, real progress in tamping down localized outbreaks. There is still work to do before we have the virus under control in the U.S., but the results in July showed we are on the right path.

The economic updates in July were mixed and pointed to a slowing recovery, following the strong rebound in activity we saw in May and June. Although many of the spending reports from July have not yet been released, the data we have seen so far is concerning. Weekly initial jobless claims, which show how many new Americans filed for unemployment each week, rose for two weeks in a row in July. This marks the first increase for weekly initial claims since March and highlights the challenges rising case counts created for the job market. 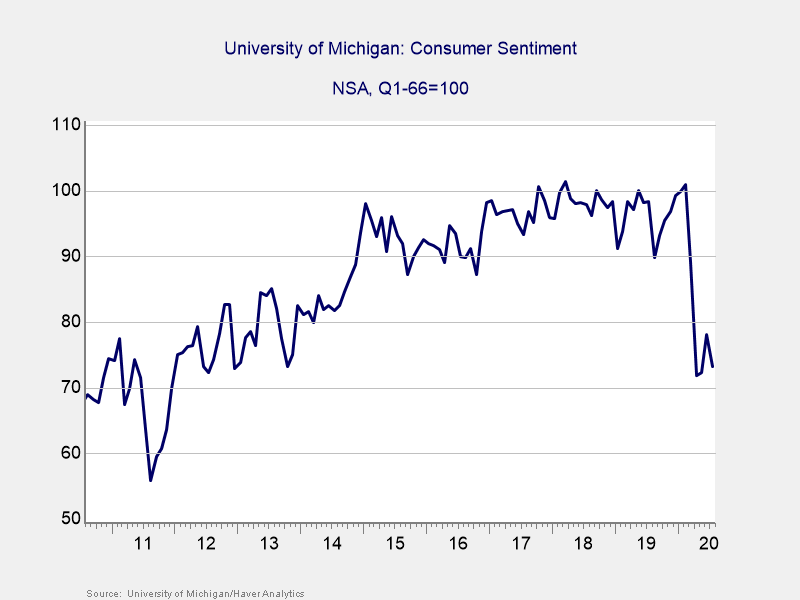 Despite these reports, July showed signs of hope as well. Business confidence and spending came in better than expected, indicating that businesses were willing and able to open once lockdown restrictions lifted. We also saw continued strength in the housing market, with home builder confidence shooting up by more than expected in July. Home builder confidence hit a seven-year low in April and now sits near all-time highs. The housing market has been a bright spot in the recent recovery. It has shown surprising resilience driven in large part by mortgage rates that hit historic lows in July.

As has been the case for much of the year, very real risks to the economic recovery exist and should be monitored. July showed us how localized outbreaks and rising case counts can be a barrier to further economic improvements.

We also saw the true extent of the damage caused by lockdown efforts firsthand when the first estimate for economic output in the second quarter showed gross domestic product contracting at a record rate of 32.9 percent annualized. This served as a reminder that the road to a full economic recovery will likely be long, with setbacks on the way. With that said, we saw very real progress on the public health front in July and can expect it to continue.

Markets are pricing in health and economic improvements, but it’s always possible negative news will rattle investors and drive volatility. Trade tensions between the U.S. and China and rising social unrest could negatively affect markets in the short term as well. Given the uncertain times, maintaining a well-diversified portfolio that matches investor goals and timelines remains the best path forward for most. As always, if concerns remain, you should contact your financial advisor to discuss your investment plan.

All information according to Bloomberg, unless stated otherwise. Disclosure: Certain sections of this commentary contain forward-looking statements based on our reasonable expectations, estimates, projections, and assumptions. Forward-looking statements are not guarantees of future performance and involve certain risks and uncertainties, which are difficult to predict. Past performance is not indicative of future results. Diversification does not assure a profit or protect against loss in declining markets. All indices are unmanaged and investors cannot invest directly into an index. The Dow Jones Industrial Average is a price-weighted average of 30 actively traded blue-chip stocks. The S&P 500 Index is a broad-based measurement of changes in stock market conditions based on the average performance of 500 widely held common stocks. The Nasdaq Composite Index measures the performance of all issues listed in the Nasdaq Stock Market, except for rights, warrants, units, and convertible debentures. The MSCI EAFE Index is a float-adjusted market capitalization index designed to measure developed market equity performance, excluding the U.S. and Canada. The MSCI Emerging Markets Index is a market capitalization-weighted index composed of companies representative of the market structure of 26 emerging market countries in Europe, Latin America, and the Pacific Basin. It excludes closed markets and those shares in otherwise free markets that are not purchasable by foreigners. The Bloomberg Barclays Aggregate Bond Index is an unmanaged market value-weighted index representing securities that are SEC-registered, taxable, and dollar-denominated. It covers the U.S. investment-grade fixed-rate bond market, with index components for a combination of the Bloomberg Barclays government and corporate securities, mortgage-backed pass-through securities, and asset-backed securities. The Bloomberg Barclays U.S. Corporate High Yield Index covers the USD-denominated, non-investment-grade, fixed-rate, taxable corporate bond market. Securities are classified as high-yield if the middle rating of Moody’s, Fitch, and S&P is Ba1/BB+/BB+ or below.