Markets continue to recover in May

May saw equity markets around the world rise for the second month in a row, as efforts to reopen economies began taking hold. The Dow Jones Industrial Average (DJIA) rose by 4.66 percent, and the S&P 500 gained 4.76 percent. The Nasdaq Composite led the way with a 6.89 percent gain.

These strong results came despite worsening fundamentals. According to Bloomberg Intelligence, as of May 29, the first-quarter blended average earnings growth rate for the S&P 500 sat at –16.5 percent. If this result holds, it would mark the worst quarter for earnings since the second quarter of 2009. Investors appear to believe the disruption created by the pandemic will dissipate as the country begins to reopen, however. Fundamentals and performance can diverge in the short term, but fundamentals drive performance over the long term. So, it will be important to keep an eye on the pace of earnings recovery over the next few quarters.

From a technical perspective, May was a mixed month for U.S. markets. Both the S&P 500 and the Nasdaq finished the month above their respective 200-day moving averages, with the Nasdaq spending the entire month comfortably above trend. The DJIA was the outlier, remaining below its trendline throughout the month, but it did make solid progress in moving back toward trend. This is another important area to monitor, as a prolonged break above the 200-day moving average can indicate improving investor sentiment and serve as a tailwind for future performance.

The story was much the same internationally. The MSCI EAFE Index of developed international countries gained a solid 4.35 percent. The MSCI Emerging Markets Index also saw gains during the month, increasing by 0.79 percent. Technicals remained challenging for international markets in May. Both the EAFE and emerging markets indices remained well below their trendlines, where they’ve sat throughout the pandemic, as investors remain skeptical of the pace of recovery internationally.

Fixed income markets had a solid month, benefiting from continued low interest rates and supportive policy from the Federal Reserve. The 10-year Treasury yield remained largely unchanged, starting May at 0.64 percent and finishing the month at 0.65 percent. The Bloomberg Barclays U.S. Aggregate Bond Index returned 0.47 percent during the month. High-yield fixed income, which is typically more closely tied to moves in the equity markets than changes in yields, had an even better month. The Bloomberg Barclays U.S. Corporate High Yield Index gained an impressive 4.41 percent in May. High-yield spreads continued to fall, indicating investors were comfortable accepting lower-yield premiums to invest in high-yield bonds.

May saw continued progress in slowing the spread of the coronavirus, leading many states to begin reopening efforts. The month-end growth rate of roughly 1.5 percent is significantly lower than the peak of roughly 5 percent growth we saw in April. This shows the very real progress we’ve made in getting the virus under control here in the U.S.

Testing was another major area of improvement during the month. The daily average test counts increased by roughly 50 percent in the last week of May compared with the last week of April. The percentage of positive tests also fell in May. This indicates that we are starting to test large swaths of people, not just those who are most likely to be infected. The percentage of positive tests fell below the crucial 10 percent level that experts say indicates there is enough testing in a population. There is still progress to be made, but the continued positive trends are certainly good news.

One of the most notable things we did not see during the month was a surge in new infections toward month-end. This shows that efforts to reopen economies in some states have not had an immediate impact on the number of new cases. As a result, hopes are rising that a dreaded second wave of infections may be avoidable if the pace of reopening remains measured.

Economic data indicates the worst may be behind us

One of the hardest-hit areas of the economy was the labor market. Roughly 20.5 million jobs were lost in April, driving the unemployment rate to a post-war high of 14.7 percent—well above the 10 percent high-water mark set during the 2008 financial crisis. There were signs in May that the labor market may have bottomed, though. The pace of layoffs decreased for eight straight weeks, and a surprise decline in continuing unemployment claims midmonth suggests workers are going back to their jobs. If this holds, it provides reasons for optimism on the labor front.

Consumer spending, which accounts for roughly two-thirds of all economic activity, was also weak during the month. April’s retail sales fell by 16.4 percent, breaking March’s record 8.3 percent decline. As you can see in Figure 1, this fall in sales is unprecedented in recent history. The sharp decline in consumer spending was worse than expected and was echoed by a historically bad personal spending report for April. 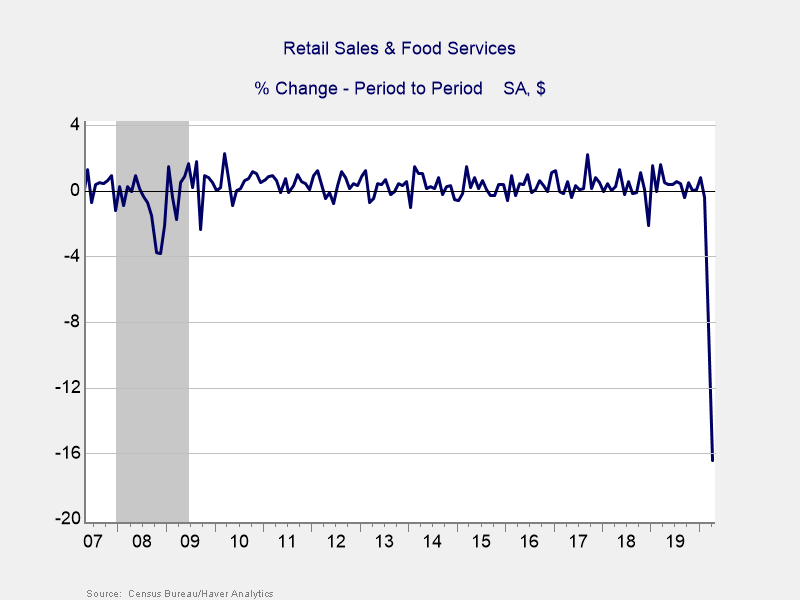 Despite the continued weakness in consumer spending, there are reasons to have hope as we enter the summer. Both major measures of consumer confidence increased modestly in May. We’ve also seen promising increases in restaurant bookings and mobility in places where reopening efforts have begun. There is still a long way to go, but these positive developments show we are at least finally heading in the right direction.

Businesses also showed some signs of stabilization during the month. Manufacturer and service sector confidence fell in April, but by less than expected. So, it appears business confidence was not hit as hard as economists thought it would be. There was also positive news on the spending front. Core durable goods orders, a common proxy for business investment, fell by much less than expected. Although the data was still bad on an absolute basis, businesses weathered the storm better than expected, which is a positive sign for future growth.

The positive developments in May are certainly worth celebrating, but very real risks remain. Although we did not see a large surge in coronavirus cases in May, there is still potential for a second wave and a return to shelter-in-place orders.

On the economic front, while there was some positive news released during the month, the fact of the matter is the damage has been significant. There’s no quick and easy way to get back to normal, and we’ll likely come across a variety of roadblocks on the path to recovery.

Beyond the economic effects of the virus, other risks could also shake markets. Worsening trade relations between China and the U.S. could cause more volatility, and the rising social unrest in the U.S. could also have an effect. Markets are currently pricing in a best-case-scenario outlook, so any negative news could rattle investors and drive volatility. With that in mind, maintaining a well-diversified portfolio that matches investor goals and timelines remains the best path forward for most; however, you should consult with your financial advisor if concerns remain.