November was a strong month for markets, as news about developmental vaccines for the coronavirus caused markets to surge. The S&P 500 gained 10.95 percent in November, and the Nasdaq Composite rose by 11.91 percent. The Dow Jones Industrial Average led the way with a 12.14 percent gain. These strong results brought the three indices to all-time highs.

These market gains were accompanied by improving fundamentals. According to Bloomberg Intelligence, as of November 24 with 97 percent of companies having reported results, the blended third-quarter earnings decline for the S&P 500 sits at 7.3 percent. This is notably better than analyst estimates at the start of earnings season for a 21.5 percent drop during the quarter. Roughly 85 percent of companies are beating expectations.

Technical factors were also supportive for markets during the month. The three major indices remained well above their respective 200-day moving averages in November, marking five straight months where all three indices finished the month above trend. The 200-day moving average is a widely followed technical indicator, as sustained breaks above or below this level tend to signal shifting investor sentiment. The continued technical support for equity markets since reopening efforts took hold indicates that investors remain confident in U.S. companies and their ability to withstand the pandemic.

The story was much the same internationally. Positive vaccine news pushed global equity markets higher during the month. The MSCI EAFE Index gained an impressive 15.50 percent in November, which caused the index to pass pre-pandemic levels for the first time. Emerging market investors also celebrated the vaccine news, with the MSCI Emerging Markets Index gaining a strong 9.25 percent. Both of these indices finished the month above their respective 200-day moving averages, indicating solid technical support. This was a welcome rebound for the MSCI EAFE Index, which ended October below its 200-day moving average.

Fixed income also had a positive month, supported by falling interest rates. The 10-year Treasury yield fell from 0.88 percent at the end of October to 0.84 percent at the end of November. The Bloomberg Barclays U.S. Aggregate Bond Index gained 0.98 percent during the month. High-yield bonds, which are typically less tied to movements in rates, also had a positive month. The Bloomberg Barclays U.S. Corporate High Yield Index returned 3.96 percent in November. High-yield spreads narrowed to their lowest level since February, indicating that investors’ tolerance for higher-yielding, riskier securities rose during the month. This makes sense, given the rally in equity markets we saw in November.

November was a mixed bag on the public health front, yet there are reasons for optimism looking forward. COVID-19 case counts continued to rise, but the pace of case growth slowed near month-end, which could mean we’ll see a peak in case growth in December. Although we are far from out of the woods with this third wave of infections, the slowdown in growth indicates that current containment efforts may be having a positive effect.

We saw continued growth in daily testing throughout November. The positive test rate started to decline by month-end, showing we are doing a better job of identifying and addressing new infections. The positive test rate is still above the WHO’s recommended 5 percent level, but we are now moving in the right direction after two months with a rising rate. It takes time to contain new outbreaks, but the developments in November indicate we may be making progress in dealing with this third wave.

With that being said, there are still very real risks on the medical front. The potential for an increased infection rate following the Thanksgiving holiday is a primary concern. We will have to wait and see if there is a large uptick in cases in the weeks to come, so case counts in December will continue to be closely monitored. Ultimately, between the slowing case growth, improvements in testing, and vaccine news, November was largely a positive month for public health.

The economy continued to grow in November, but there were signs that rising case counts served as a headwind for faster growth during the month. Consumer spending, which has been one of the bright spots in the economic recovery, showed continued growth. October’s retail sales and personal spending reports, however, marked their lowest monthly growth levels since lockdowns were lifted. There were also signs of a slowdown in spending growth in the higher-frequency consumer spending data.

Consumer confidence was a concern as well, with both major measures of consumer confidence falling by more than expected in November. One of the factors that likely led to this decline was rising stress on the job market. We saw initial jobless claims tick up for two consecutive weeks for the first time since July. This highlights the negative effect rising case counts had on the recovery during the month.

Business spending and confidence figures pointed to continued growth. Both manufacturer and service sector confidence remained near or above pre-pandemic levels, indicating that businesses remain resilient despite rising case counts. This high level of confidence translated into faster business spending, with the durable goods orders report for October coming in above expectations. Core durable goods orders, which strip out the impact of volatile transportation orders, were especially impressive. They rose by 1.3 percent during the month against forecasts for more modest 0.5 percent growth. Core durable goods orders are often used as a proxy for business investment. As you can see in Figure 1, core orders have rebounded well past pre-pandemic levels. Business investment was a positive contributor to gross domestic product growth in the third quarter. This strong start to the fourth quarter is a positive sign for economic growth as we finish out the year. 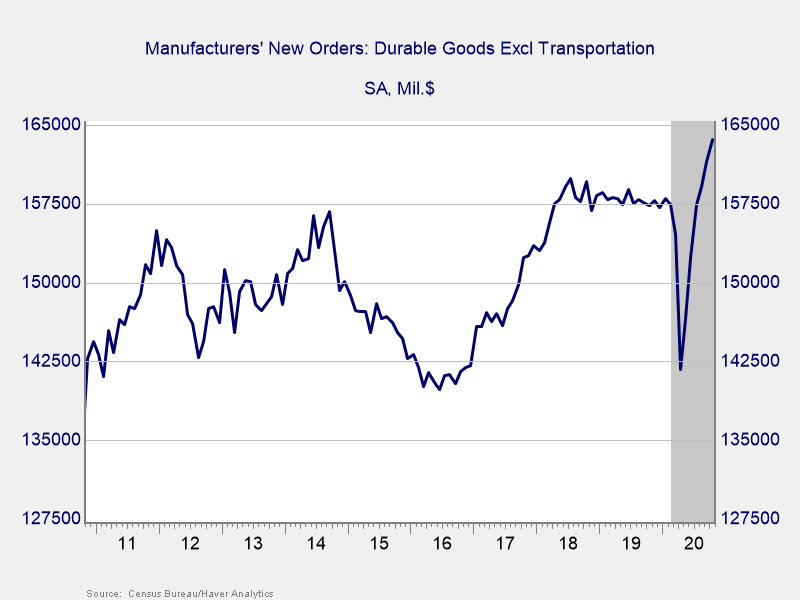 As we saw in November, medical concerns still present a risk to the continued economic recovery. While markets cheered about the vaccine news, it will likely be well into 2021 before vaccines are available for all. In the meantime, setbacks on the public health front could spur further volatility. Coronavirus cases are still rising and could lead to further drops in consumer confidence and spending in December.

Political risks also remain, despite the conclusion of the November elections. Although there is hope for another round of federal stimulus early in 2021, it is likely we will head into the new year with a divided federal government, which could lead to a lower or slower stimulus than expected. There are also international concerns, as U.S.-China trade relations are strained and a no-deal Brexit at year-end seems likely.

. . . But the recovery continues

Despite the risks, both the economy and markets remain resilient. We will get the pandemic under control, and vaccines will accelerate that process. While the economy may have slowed, it’s still growing and has surpassed pre-pandemic levels in some areas. Strong earnings results are a sign that companies are adapting. The continued market rally says investors think things will get better—but volatility is always a possibility. A well-diversified portfolio that matches investor goals and timelines remains the best path forward for most. If concerns remain, however, contact your financial advisor to review your financial plans and goals.