Markets continued to rally in the final month of 2020. The Nasdaq Composite led the way with a 5.71 percent gain for the month. The S&P 500 gained 3.84 percent, and the Dow Jones Industrial Average (DJIA) rose by 3.41 percent. These results contributed to a strong quarter for markets. The Nasdaq once again led with a 15.63 percent quarterly return. The S&P 500 gained 12.15 percent while the DJIA managed a 10.73 percent return. Despite the market volatility in March and April, all three major indices finished the year in positive territory. The DJIA gained 9.72 percent for the year, and the S&P 500 returned 18.40 percent. The Nasdaq, with its heavy technology weighting, ended the year with a 44.92 percent gain.

These strong results coincided with improving fundamentals to end the year. According to Bloomberg Intelligence, as of December 24 with 99 percent of companies having reported, the blended third-quarter earnings decline for the S&P 500 came in at 6.9 percent. This result is significantly better than the initial forecast for a 21.5 percent decline. It shows businesses were willing and able to adapt to the ongoing pandemic with more success than anticipated. This is a good sign for the economy overall and points to a potential return to earnings growth as soon as the first quarter of 2021.

Technical factors were also supportive during the month and quarter. All three major indices remained above their respective 200-day moving averages, despite some volatility at the end of October that brought the DJIA close to its trend line. The 200-day moving average is a widely followed technical signal. Prolonged breaks above or below this trend line can signal shifting investor sentiment for an index. This marks six consecutive months where all three major indices finished the month above trend, indicating strong technical support for markets throughout the second half of the year.

International markets also finished the year strong, capping off a solid 2020. The MSCI EAFE Index gained 4.65 percent in December, which contributed to the 16.05 percent increase during the quarter. Volatility earlier in the year served as a headwind for overall performance, limiting the index to a 7.82 percent annual gain. Performance for developed international markets was muted compared with U.S. markets. The MSCI EAFE Index spent much of the year below pre-pandemic levels before a 15.50 percent surge in November brought it into positive territory. Emerging markets fared better, with the MSCI Emerging Markets Index gaining 7.40 percent during the month, 19.77 percent for the quarter, and 18.69 percent for the year. Technicals were supportive for international markets at year-end, with both indices finishing December well above their respective 200-day moving averages.

High-yield fixed income returned a solid 1.88 percent during the month, 6.45 percent for the quarter, and 7.11 percent for the year. High-yield credit spreads continued to fall throughout the month and quarter, finishing the year at 3.87 percent. This is an improvement from the pandemic-induced high of 10.87 percent in March, highlighting continued investor willingness to accept lower yields for higher-risk securities throughout the recovery.

We saw signs of progress on the public health front during the month. New cases per day showed improvement at month-end, although it’s likely the holidays contributed to a lull in reporting that may have distorted the data. If case growth is in fact slowing, we could see a peak in the next few weeks.

Another positive development was the start of the public vaccination process during the month. The number of vaccinations was relatively low at year-end, but the pace should pick up as state and local governments build out the necessary public health infrastructure.

There are very real reasons for hope on the public health front, but the third wave still represents a risk to the ongoing economic recovery. Rising case counts had a negative effect on the consumer economy during the quarter, with slowing job growth leading to softening consumer confidence and spending figures.

The drop in consumer spending was especially notable. Retail sales and personal spending both fell in November, highlighting the headwinds created by increased shutdown measures. As you can see in Figure 1, this was the first monthly drop for personal spending since initial lockdowns were lifted in April. This is concerning given the importance of consumer spending for the economy. But the fact that the November decline pales in comparison to the spending declines we saw during the initial lockdowns indicates that consumer spending has remained much more resilient during the third wave. There is hope that the stimulus bill passed at the end of the year and continued public health progress will spur spending growth, but they’ll likely take some time to show up in the data. 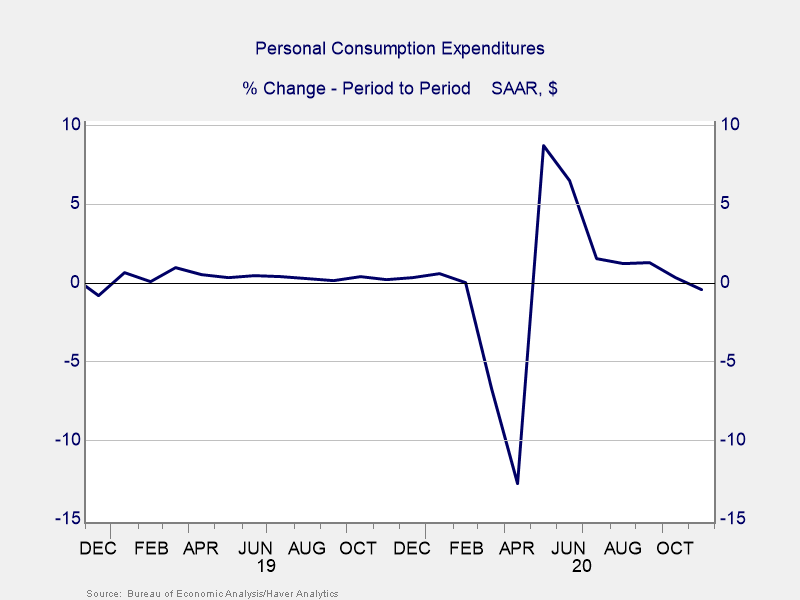 Businesses continued to show impressive resilience throughout the fourth quarter. Business confidence and spending held up well despite rising case counts during the period. Both manufacturer and service sector confidence remain near or above pre-pandemic levels, indicating continued recovery for businesses during the quarter. These strong confidence figures have translated into faster spending and output growth, as highlighted by better-than-expected industrial production and manufacturing output in November. Core durable goods orders, which are often used as a proxy for business investment, also showed solid growth in November. This is especially impressive given that they have already surpassed their pre-pandemic levels.

The solid data released during the month paints a picture of continued recovery for businesses. Given the slowdown in the consumer recovery that we saw over the same period, this resilience is encouraging and could help lessen the impact of slowing consumer spending growth in the fourth quarter.

December’s updates continued to highlight the risks presented by rising case counts and increased local restrictions. But there are reasons for optimism, especially if we see the pace of vaccinations improve. The economy remains far more resilient during this third wave than it was during the initial wave of infections. So, while we are not out of the woods with the pandemic, there is light at the end of the tunnel.

As we continue to monitor political risks, we have started to see signs of more stability. The additional stimulus at year-end was a positive development for markets and the economy. Internationally, risks decreased as well. A last-minute trade deal between the U.K. and EU helped avoid the potential for a disruptive no-deal Brexit. Although political risks remain, the updates at year-end were largely positive and helped decrease the immediate risk level.

The resilient economy, combined with the expected tailwinds from additional stimulus and further public health progress, indicates we are in a relatively good place to start the year. There is the possibility for further volatility in the short term, but continued recovery remains the most likely outcome. Given the possible short-term uncertainty, a well-diversified portfolio that matches investor goals and timelines remains the best path forward for most. But if concerns remain, contact your financial advisor to review your financial plan.