June was another positive month for markets, despite concerns about the spread of the coronavirus causing some volatility near month-end. All three major indices posted positive returns for the month. The S&P 500 returned 1.99 percent, the Dow Jones Industrial Average (DJIA) gained 1.82 percent, and the Nasdaq Composite rose by 6.07 percent. On a quarterly basis, all three indices showed strong rebounds following March’s volatility. The Nasdaq led the way with a quarterly gain of 30.95 percent, while the DJIA gained 18.51 percent and the S&P increased by 20.54 percent.

These strong results came despite worsening fundamentals. According to Bloomberg Intelligence, as of June 26, the estimated earnings growth rate for the S&P 500 in the second quarter is –44.1 percent. This is down from estimates at the start of the quarter for a more modest 16.1 percent decline. Over the long term, fundamentals drive performance. So, the market rally in the face of these numbers suggests that investors expect a continued recovery and are willing to overlook a quarter or two of declines.  The expected poor second-quarter results, while concerning, are understandable, given the damage created by anti-pandemic measures that were in place for much of the quarter.

From a technical perspective, June was another mixed month for U.S. markets. The S&P 500 managed to break above its 200-day moving average at the end of May. It finished above trend for the second month in a row, despite briefly falling below this important technical level twice during the month. The DJIA broke above trend early in the month before falling back and finishing June below its 200-day moving average. The Nasdaq was the only major index that spent the entire month above its 200-day trend line, after doing the same in May.

The story was similar for international markets during the month and quarter. The MSCI EAFE Index gained 3.41 percent in June, capping off a quarter that saw the index rise by 14.88 percent. Emerging markets fared even better, gaining 7.40 percent in June and 18.18 percent for the quarter. The developed and emerging market indices remained below their 200-day moving averages at month-end. Both indices managed to briefly break above trend during the month, however, which is an encouraging sign.

Fixed income markets also had a solid month and quarter, driven by continued support from the Federal Reserve that kept interest rates constrained. The 10-year U.S. Treasury yield was largely range-bound. It started the period at 0.62 percent and hit a high of 0.91 percent in early June before falling back to 0.66 percent at quarter-end. The Bloomberg Barclays U.S. Aggregate Bond Index rose by 0.63 percent during the month and 2.90 percent for the quarter.

High-yield fixed income, which is typically driven less by interest rate movements and more closely correlated to equity markets, also had a strong quarter. The Bloomberg Barclays U.S. Corporate High Yield Index gained 0.98 percent in June and 10.18 percent for the quarter. High-yield bond spreads ended the month largely unchanged, after falling notably in both April and May.

Despite the positive news in the markets, the public health data released during the month showed some setbacks. New daily coronavirus cases in the U.S. set record highs toward month-end. Outbreaks in several states sparked fears of a national second wave of infections. Most of the attention was centered on rising case numbers in Arizona, California, Florida, and Texas, but cases have been increasing in other states as well. We finished the quarter with the highest level of active cases in the U.S. on record, although the daily case growth rate remained under control at the national level.

The rise in cases during the month led some state and local governments to pause or, in some instances, even roll back reopening efforts. For example, Florida and Texas recently announced they would be closing bars again, and large swaths of California are doing the same to try to contain localized outbreaks. These measures should help bring those outbreaks under control, even as they risk slowing the economic recovery.

Testing continued to improve in June, ending the month with a new daily high of roughly 650,000 tests, compared with roughly 400,000 at the end of May. Although the growth in testing capability is a positive development, current testing levels are still not high enough to track and contain the disease on a national level. This was evidenced by the increase in the ratio of positive tests we saw during the month. The seven-day moving average of positive tests increased from 4.9 percent at the start of June to 6.9 percent at month-end. The World Health Organization recommends that communities maintain a positive test rate of less than 5 percent for two weeks before reopening efforts begin.

The local outbreaks have raised risks and should be watched, but the daily case growth rate remains at a much better level than during the first wave and showed signs of stabilization at month-end. With states acting to contain the outbreaks, the risks at the national level remain low.

The economic data released in June largely pointed to a faster-than-expected rebound in economic activity as reopening efforts took hold. Perhaps the best example of this comes from consumers, who saw confidence and spending figures rise notably. May’s retail sales report was a highlight, with headline sales rising by 17.7 percent against expectations for an 8.4 percent increase. Personal spending rose by 8.2 percent, indicating that consumers were ready and willing to go out and spend as reopening efforts kicked off. Consumer spending accounts for roughly two-thirds of overall economic activity, so these reports were very encouraging.

The strong consumer spending growth was supported by improving consumer confidence during the quarter. Both major measures of consumer sentiment rebounded in May and June after hitting multiyear lows in April. The Conference Board Consumer Confidence Survey was especially impressive. It improved from 85.9 in May to 98.1 in June, the largest single-month increase for the index since 2011. As you can see in Figure 1, there is still quite a way to go before we’re back to pre-pandemic confidence levels, but we’re heading in the right direction. 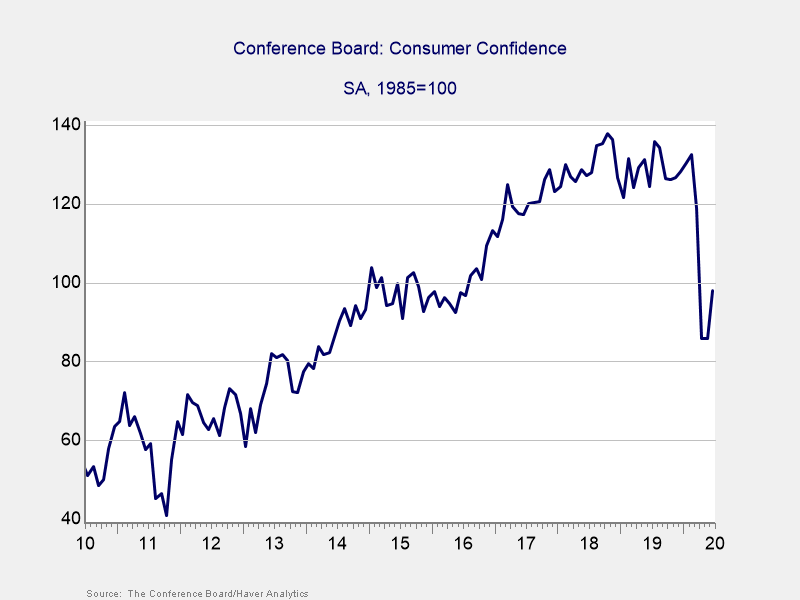 Consumer confidence was supported by improving jobs numbers and a strong equity market rebound. May’s employment report showed a surprising 2.5 million jobs were created, against economist estimates for a loss of 7.5 million jobs. We’ve also seen initial jobless claims and continuing unemployment claims decline recently, indicating that the worst of the job losses caused by the pandemic is likely behind us. The improving employment situation in May was one of the first reports to show significantly better-than-expected results for the economy as reopening efforts began.

Business confidence and spending also showed improvement during the month. Business confidence, as measured by the monthly Institute for Supply Management Purchasing Managers’ Index surveys, rose in May after hitting multiyear lows in April. This improving confidence translated into faster spending growth. May’s durable goods orders report showed a 15.8 percent increase in orders, which helped offset an 18.1 percent decline in April. Core durable goods orders, which are often used as a proxy for business investment, also saw a solid rebound in May, indicating that businesses were willing to spend as reopening efforts took hold. All things considered, the improvements we saw on the economic front during the month were very encouraging and point to a faster-than-expected recovery if things stay on track.

Although the positive economic news we received in June was encouraging, most of the data was backward looking. It should be noted that risks to the economic recovery and market rally are still out there. Month-end headlines were focused primarily on the rising case count. Any further bad news about the pandemic could lead to slower reopening efforts or lowered confidence and spending figures. Given the market’s recent resilience, it does not seem like rising case counts on their own are likely to trigger more volatility. They could lead to worsening fundamentals, however, and should certainly be monitored.

Looking past the coronavirus, trade tensions between the U.S. and China continue to rise. This will be an important area to monitor as the recovery begins worldwide, given the damage to global trade caused by the pandemic. Rising social unrest here in the U.S. is also worth monitoring. The uncertainty created by continued demonstrations and calls for political action could lead to additional market volatility. And, as always, there is the possibility that currently unknown risks could surface and negatively affect markets.

Ultimately, though we saw positive economic updates during the month, the setbacks in containing the virus serve as a reminder that we are far from out of the woods. Even as overall conditions remain positive, over the next few months, we are likely to face challenges and volatility. Given this uncertainty, a well-diversified portfolio that matches timelines and risk levels remains the best path forward for most investors; however, you should consult with your financial advisor if concerns remain.