Equity markets experienced widespread selloffs in June as fears of a potential recession and continued high inflation weighed heavily on investors. This capped off a challenging second quarter for markets, as all three major U.S. indices ended the month and quarter down. The S&P 500 lost 8.25 percent during the month and 16.1 percent for the quarter; the Dow Jones Industrial Average lost 6.56 percent during the month and ended the quarter down 10.78 percent; and the Nasdaq Composite lost 8.65 percent in June and 22.28 percent for the quarter. The Nasdaq Composite saw the largest monthly and quarterly declines due to its heavier weighting on beaten down technology stocks.

These declines came despite improving fundamentals during the quarter. Per Bloomberg Intelligence, as of June 17, 2022, with 99.8 percent of companies having reported actual earnings, the average first-quarter earnings growth rate for the S&P 500 was 9.01 percent. This is up notably from initial estimates for a more modest 5.19 percent increase at the start of earnings season and represents solid quarterly earnings growth for the index. Over the long term, fundamentals drive performance, so this better-than-expected result in the first quarter was a positive sign for markets. Looking forward, analysts expect to see further earnings growth throughout the rest of the year.

Technical factors, on the other hand, were a headwind for U.S. equity markets during the month and quarter with all three major U.S. indices under their respective 200-day moving averages. This marks three consecutive months with all three indices finishing below this important technical trendline. The 200-day moving average is a widely followed technical indicator as prolonged stretches above or below can be a sign of shifting investor sentiment for an index. While it’s too soon to say if investors have soured on U.S. equities based on technicals alone, the second quarter’s technical weakness was a potential cause for concern and should be monitored going forward.

The story was much the same internationally during the month and quarter when concerns over inflation, interest rates, and a slowing global economy weighed on investors. The MSCI EAFE Index lost 9.28 percent in June, which capped off a 14.51 percent loss for the quarter. The MSCI Emerging Markets Index saw a similar 6.56 percent decline for the month and a 11.34 percent loss for the quarter. Technicals were a challenge for both international indices during the quarter, as both remained well below their 200-day moving averages for almost the entire period.

Even fixed income struggled as rising interest rates caused prices for previously issued bonds to fall. The 10-year U.S. Treasury yield started the quarter at 2.39 percent and rose to a high of 3.49 percent in mid-June before falling to end the quarter at 2.98 percent. The Bloomberg U.S. Aggregate Bond Index declined 1.57 percent during the month and 4.69 percent over the quarter.

High-yield fixed income also struggled; the Bloomberg U.S. Corporate High Yield Bond Index dropped 6.73 percent in June, which contributed to a 9.83 percent loss for the quarter. High-yield credit spreads rose from 3.40 percent at the start of the quarter to 5.87 percent by the end of June.

The market underperformance in the second quarter was largely driven by investor concerns about inflation and the Federal Reserve (Fed)’s decision-making process. The Fed spent the quarter trying to combat inflation by tightening monetary policy through a series of interest rate hikes, and the central bank has made it clear that it plans on continuing to hike rates until there is sustained evidence that inflation is slowing. Higher interest rates from the Fed caused markets to reprice both equities and fixed income investments, which caused the declines that we saw over the quarter.

Investor concerns about a possible recession started to increase in June as economic updates showed signs of a potentially slowing economy due to high interest rates. Given the continually high levels of inflation and the Fed’s stated goal of getting prices under control as soon as possible, investors are concerned that company earnings may be negatively affected by a potential slowdown.

With that said, there were signs that the worst impact from inflation may be behind us (in June). We saw evidence that inflation is starting to slow due to improved supply chains and moderating energy costs. We also saw long-term interest rates decline toward the end of the month, which is a sign that investors are less concerned about long-term high inflation. Ultimately, while investor concerns surrounding inflation and interest rates caused market turbulence during the quarter, the worst phase may be behind us.

Despite market selloffs, the economic data releases still showed signs of continuous growth. Hiring was strong throughout the month and quarter, with the May job report showing 390,000 added jobs. This represents a very strong month of hiring on a historical basis and was backed by the unemployment rate, which was 3.6 percent in May. This is largely in line with the pre-pandemic low of 3.5 percent and highlights the very real progress we’ve made in getting folks back to work following the end of initial Covid-19 lockdowns in spring 2020.

Business spending was also healthy throughout the month and quarter as business owners continued to invest in their businesses to meet high levels of demand. As you can see in Figure 1, core durable goods orders increased throughout the quarter and this proxy for business investment ended May well above pre-pandemic levels. Ongoing business spending during the quarter was an encouraging signal that business owners are still confident in economic expansion despite the headwinds from inflation and higher interest rates. 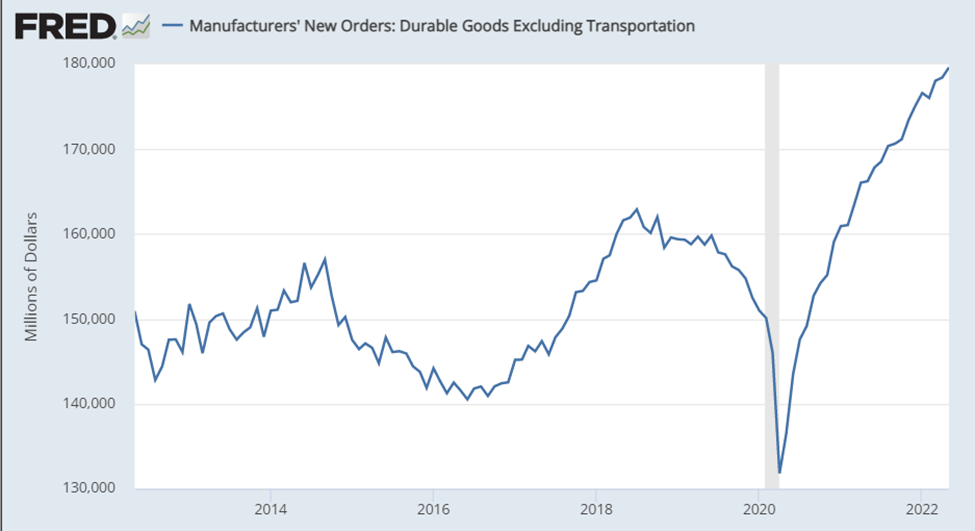 While consumer and business spending continued to show signs of growth during the month and quarter, the same can’t be said for the housing sector. Housing was one of the best performing sectors early on in the pandemic as record-low mortgage rates and shifting home buyer preference for larger single-family homes caused a surge in housing sales and new home construction. With that said, 2022 has been another story as rising mortgage rates, lack of supply of existing homes for sale, and rising prices all served as headwinds for further sales growth. The average 30-year mortgage rate increased from 3.3 percent at the start of the year to 5.83 percent at the end of June, which weighed on prospective home buyers and the pace of housing sales.

The pace of existing home sales peaked at an annualized rate of 6.49 million sales in January but has dropped every month since and ended May at 5.41 million annual sales. This is largely in line with pre-pandemic levels and is a sign that the Fed’s attempts to slow the economy though higher rates are starting to have a tangible influence. While slowing housing sales growth has not yet had a notable impact on prices, the headwind from higher rates is expected to slow sales growth and price appreciation in the months ahead, which could help tamp down overall inflationary pressure.

Risks Remain, as Do Solid Fundamentals

The selloffs in June were a reminder that very real risks remain for markets and the economy, with the bulk of the concern surrounding inflation, interest rates, and the Fed. Despite market concerns about the turbulence from inflation and the central bank, it’s important to remember that economic fundamentals are sound and continued growth is still the most likely outcome in the months ahead.

The Fed’s plan to tighten monetary policy throughout the course of the year will continue to present a risk for markets, especially if the central bank surprises investors with the timing and size of further rate hikes. Additionally, while the pandemic’s effect on markets has diminished, this does still represent another potential risk factor that should be monitored, especially if we see another wave of case growth later in the year. Although geopolitical risks appear to have largely stabilized in June, the war in Ukraine and the ongoing lockdown in China could also negatively affect markets in the months ahead.

Despite persistent risks to markets and the economy, economic fundamentals here in the U.S. are positive and the most likely path forward is growth. The strong labor market and continued business and consumer spending are signs that core fundamentals are strong and that the economic recovery remains on track. While there are concerns of potentially slower growth later in the year due to higher rates, slow growth is still growth and this may serve to help combat inflation. Overall, while this was certainly a painful start to the year for investors, markets have largely priced in much of the negative news. We may be approaching a turning point as the news gradually gets better.

The pace of economic expansion is still uncertain, and we’re likely to see periods of turbulence. A well-diversified portfolio that matches investor goals and timelines remains the best path forward for most; however, you should reach out to your advisor to discuss your financial plan if you have concerns.